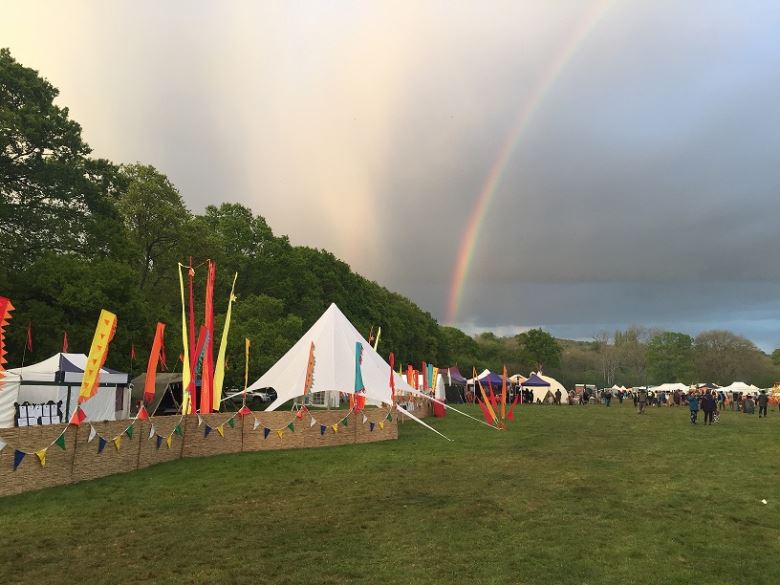 The new – at least to me – Death Café Tepee was a must go destination (sort of) and the Healing and Expanding through Grief workshop, hosted by the luminous Samira Harris, was deeply moving and beautiful. Whatever happened to sex and drugs and rock n’ roll eh?

Into the Wild happens twice each year, the Beltane festival being the more modest and bashful sibling to the bold and brassy larger summer gathering held over the August bank holiday. It’s a drug and alcohol free festival and the vibe is very much just-back-from-India meets love, peace and healing, along with a substantial dose of good old-fashioned dancing and listening to music. Actually old fashioned isn’t the apposite phrase as in reality most of the dancing on display drew more from an interpretive and wacky genre than anything approaching classic disco. That’s not to say I didn’t do my best to drag the much-lamented John Travolta thrust back into fashion whilst jigging around enthusiastically to some excellent sounds in the bijou main tent.

A whole host of bands and solo artists performed throughout the festival in many of the tents, cafes and vegetarian/vegan eateries scattered around the modest site and, inevitably, their quality varied. There were moments of spine tingling brilliance, step up Martha Tilston and Nathan Ball for example, and as ever moments of, hmm, something less than spine tingling brilliance. It’s a matter of taste of course and as it’s such a heartfelt and homespun sort of a festival the variation in quality seemed almost an irrelevance – each and every performer was received with oodles of love and encouragement in this weekend field of dreams.

The beating heart of Into the Wild is though found in the many healing workshops and classes that are held over the weekend. These vary from the –these days – somewhat prosaic yoga, 5 rhythms and singing circles, to dancing the God and Goddess, shamanic sound bath meditations, the path of the moondancer and tobacco pipe ceremony, ecstatic birth and the initiatory descent of soul. There is, it is safe to say, something for everyone.

As well as having a good weep in the Death Café, I also very much enjoyed an hour’s sound immersion in a yurt, even though we were so closely packed in I had a stranger’s snoring head resting cosily in my armpit, and a mindfulness and singing bowl workshop which turned out to involve very little mindfulness and no singing bowls at all. Instead we tuned in to a ‘shamanic drum’ as a near hurricane threatened to blow our tepee down while immersed in a ‘great pillar of light’ with a busy Archangel Michael cutting our cords. This sort of thing does involve a suspension of disbelief, but if you have the willingness, capacity and open mindedness for it then you will be richly rewarded. I had a lovely time.

This sort of errant and imaginative labelling wasn’t limited to the mindfulness and singing bowl workshop, indeed it is a bit of a charming theme of the whole festival. I particularly enjoyed a masala chai for example, which in reality was a horror of cloves and warm water, and an oat milk hot chocolate which was neither hot nor chocolaty. I was okay with tepid oat milk though…perhaps because my cords had just been cut. That’s not to say I couldn’t have done with a good bit of heat, the festival unfortunately fell over one of the coldest May bank holiday weekends for many years; it was bloody freezing. One minor bonus of this was that the excellent opening fire ceremony was particularly well attended, (ah the so-welcome warmth of the flames!), and the social scene around the two blazing fire bowls was particularly buzzing throughout the weekend.

A few basics: the food was generally very good, all vegetarian and vegan, and reasonably priced in the main for a festival, the loos and showers achieved the usual festival low bar, the camping was relatively cramped as ever but fine, the parking was easy and near enough the camping not to create a huge logistics problem, and the general festival site was beautiful, set within a verdant heaven of lush springtime woods and bluebells.

There’s a magic in the drug-free air of this festival that can thaw even the most cynically minded of people. And if you’ve a bit of hippy gene like me you’ll fit right in; I emerged from the long weekend feeling a good deal more relaxed and energised than I had felt when I’d followed the white rabbit down the Into the Wild hole a couple of days before. I’ll be going again in the summer…