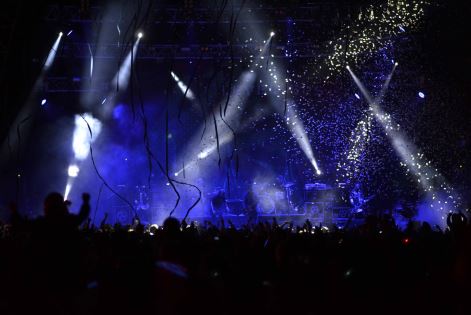 Beautiful days festival is testament to the fact you don’t need corporate sponsorship to succeed in the world and as they say, this is the festival that doesn’t sell out, but you gotta be quick to get your tickets!

Right from the off the vibe here was perfect this year and with many people having been on site since Thursday, when the music began on Friday lunchtime with an acoustic set by festival organisers the Levellers, the whole place was simply gagging for a party, and that’s exactly what happened for the next three days.

Following the Levellers was Beans on toast, this one man show delivered short songs of drink, drugs and love lost and found to a very receptive audience, I’m not sure if the crowd were already fans, or if they simply related to his subject matter, but by the end of his set there was no mistaking, Beans` reputation as the festival peoples poet, is in the can.

Friday nights main stage line up could hardly have been more diverse with Irelands gift to the punk generation, the Undertones playing a great choice of set from hits like “my perfect cousin” to album tracks like “male model” and of course a rousing “teenage kicks”. Having heard this song played relentlessly in pubs for the last 30 years by every cover band, it was quite a special moment to hear it live from the Undertones, even though Fergal Sharkey wasn’t singing it. Following on were the mighty Dreadzone, Beautiful south’s Paul Heaton and Jacqui Abbott, and finishing with three time Grammy winning Steve Earle and the Dukes. Not bad for a first night?

Saturday, and with people still arriving, the festival seemed to fill and fill, and the buzz just got bigger, but there’s always plenty of space here to retreat to, and though some of it can be difficult to negotiate if the weathers unkind, you never feel cramped, unless of course you want to.

The Bimble inn, a 100% solar powered, giant tepee is one such retreat and it gives this festival a vital shot of earthiness, a non contrived, un pretentious flavour of another world, a world with a decent PA and a great line up of bands too, which helps! The Saturday line up on the main stages was another blend of everything, with Ferocious dog, a band who just seem to go from strength to strength, seriously rocking the big top. They also seem to be marking out their territory faster than any other in the form of tattoos and merchandise, in fact I think I saw more FD T shirts than Ramones this weekend! There was folk from Steeleye Span, Jazz from Courtney Pine, punk from the Dead Kennedys, Dub, dance and finally blues from the incredible Sea Sick Steve to finish the evening. The fancy dress theme on Sunday was “Black and white”, quite simple, but the imagination and attention to detail of some of the outfits was astonishing, and the turn out was the best ive seen this summer, with all participants doing a giant conga through the crowds, passing by the panel of judges until a winner was found, it was quite surreal and a brilliant idea.

All this took place at the band stand, a small stage off the main arena, but one that played host to some of the best moments of the festival for me, the unimaginably sized crowds that were drawn to bands like the Barsteward sons of Val Doonican and Mad dog Mcrea gave the main venues a serious run for their money, there was a proper quality line up of acts on here all weekend.

I really can`t comment enough about the variety on offer at Beautiful days this year, I heard a few people griping that the line up wasn’t very good, and to be honest a lot of the main stage line up wasn’t particularly my thing, but there was always so much more on some other stage or venue that was.

The Magpie records stall was a bit of a hit with the punters, with, aside from a great selection of vinyl albums and CDs, impromptu performances from the likes of Gaz Brookfield, Ned the kids Dylan, Ferocious dog and the Barsteward sons of Val Doonican that spilled out on to the main walk ways at times and gave this festival another rootsy dimension that made it feel like the place that had it all. Sundays music programme was out shone only by the weather where the sun blazed its way through a fantastic afternoon of top acts including the Ruts DC, Reverend and the makers and the awesome Jimmy Cliff, who has more energy and more hits than you would ever guess until you see him live, he had the crowd singing, swinging and grinning and as the sun went down, the main act of the evening hit the stage, the Levellers of course.

I think pretty much every person on the site was stood in front of the main stage to witness the pyrotechnics and the incredible light show that accompanied a back catalogue of material from way back when even I was relatively young, you couldn’t hear the band at times for the wall of sound created by the Levellers revellers singing their hearts out to “only one way” as a fireworks display closed the show and the festival.

Beautiful days 2014 was great festival, well put together, well balanced and above all great fun and even the staff wave you goodbye on Monday morning!

Published on 20 August 2014 by insomniac jack