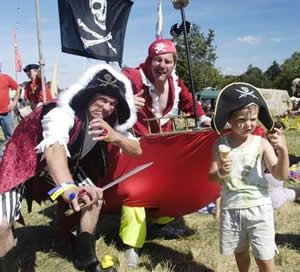 A beautiful festival, on a not so beautiful weekend. There was a constant threat of bad weather with the ever-darkening clouds always close by. Entering the festival I was more worried about my fluffy boots vs. the puddle filled path. But looking around I noticed the courageous campers with smiling faces, tiny toddler’s let lose, and the Leveller’s wondering in different directions. I knew this festival was not like any of the other.

The crowds arrive early on Friday morning, and set about making camp for the weekend. With a few hours until the main stage kick started, I had time to have a wonder and get the feel of things. Walking through the tent filled village there’s a lot to look at. Including a babyoke (karaoke for toddlers) as my boyfriend wonders off in disbelief I stand and ponder. Kind of cute but maybe not quite right I decide to head over to The Big Top. The crowds gathering for The Leveller’s acoustic set, I get a little shiver of excitement through me. Im standing in front of everyone else, at the very front of the stage, about to take photographs at Beautiful days!

With every hand raised The Leveller’s acoustic is definitely a mood setter. But with a swift change of scenery at The Little Big Top, James Gill, delivers some big beats. Ben and Lex, Foamo, and Krafty Kuts will also be joining him tonight. A friend told us we should not miss The Easy Star All-Stars. So to the Main Stage we wade. As the bass pulsates among the crowd, the multi-generational mix of hippies, drunks and regular individuals break out into swift skanking.

With Newton Faulkner appearing tonight the crowd slowly gathers in size. Personally I cannot wait, so head backstage so catch a glimpse of him if I can. With a big tour bus in site I quickly scutter back, excitement running high! Gathering myself at the front of the stage I forget all my excitement and snap away. The passion of  ‘Dream catch me’ gets the crowd singing. And the smile on Newton’s face continues to grow. The gentle rift of ‘Gone in the morning’ echoes among the crowd. Though this is not enough for Newton as he insists we sing the words as if we were pirates with rabies, being chased by a barbarian horde, who kissed our mum. As the guitar rift continues amongst some laughter the crowd bellows the lyrics over and over. ‘UFO’ is another fun filled song as Faulkner casually models some Alien like glasses. The crowd bop and dance until the set is over and an enormous clap sweeps amongst them. The Wailers conclude the night as the drizzle sets in, though all the campers still looked happy.

Saturday was a huge success with everyone definitely in the spirit of things. And with the puddles almost gone, flip-flops were in site. As lunchtime approached I wondered the camp, surprisingly it was difficult to choose what to eat as there was so much choice. Not one grotty greasy burger van in site. It was nice to see that the local businesses were also in support of this event. Kenniford farm shop, River cottage shop, Mash shack, Japanese, Chinese and Caribbean are just a few of the options available.

The Little Big Top crowd was packed like sardines. With all the ‘Rinseout’ boys present and ready to blow everyone away. These local lads were defiantly going to be a big hit at Beautiful days. Fred V & Graffix delivered a perfect set and with the crowd warmed up Warrior one were set to do well. Maxxi P, with his ever-cheeky smile, got the crowd bouncing. Mr. Nice with MC Jonny G were the last of the ‘Rinseout’ boys to perform. With Subfocus still to come the crowd was more than hyped. A night filled so far with an amazing amount of talent, boundless energy and technical variation how could it get any better. As Subfocus and MC ID took to the stage the crowd went crazy. Every hand in the air. Ready to end this night in style. Playing multiple tracks such as La Roux-In for the Kill, Fake Blood-Mars, Nero-Innocence, Doctor P-Sweetshop, Prodigy remix-Warrior Dance. And a couple of my favorites including, Major Lazer-Pon de floor and Benga ft. Katy B-On a Mission. Dancing until the early hours and finishing on a high (or for some people just high) this was definitely a night no one would be forgetting in a hurry.

With a very different feel, the main stage was jam-packed all evening too. Show of hands, with there show of instruments had a good reaction from the audience. With their politically charged performance, they related well to locals. New Model Army had a lot of supporters with there band T-Shirt been worn by a lot of people. The atmosphere was electric and with the rain reluctantly settling down everyone was gathered to see the last performer of the night, James. If Im honest (sorry if i offend anyone) I had never heard of them, and was very underwhelmed. Though he conquered the crowd and many seemed to enjoy his performance. The Little Big Top was definitely the highlight so far for me.

The last night upon us and the rain pouring down on us it was about time we took to The Big Top once again. The sing-a-long sounds of Stornoway echoing through the tent set a very different mood to what was going on outside. The melodic songs, low lighting and content audience made it hard to believe it was not only raining but pouring. While the rain calmed down, Billy Bragg heated up, performing to a very colorful crowd of stripes. I also managed to catch a glimpse of Mitch Benn, in The Little Big Top, not normally to my taste but willing to participate I watched in ore for his hole set. A brilliant writer and performer, full of laughs, with the audience sat down it was a very different feel to the other evenings In The Little Big Top!

As the rain was settling the crowd was just getting ready. This fun-filled weekend was about to be over once again and it was definitely going to go out with a bang. African Head Charge were amongst some of the first performers on The Main Stage and with their ‘original’ skanking, got the crowd moving as the beat of the drums thundered bass across the fields. Dreadzone were next on and the crowd was alive once again. The Levellers concluded this fantastic festival. Ending the night with ‘What a beautiful day’ which was ‘not weather permitting’ but brought smiles all around, leaving almost every person there singing (and dancing) in the rain. The fireworks were super and so this trouble free, entertainment filled, brilliant weekend is over once again. And I now know that I will definitely be going again next year!

Published on 05 September 2010 by SamanthaLetten