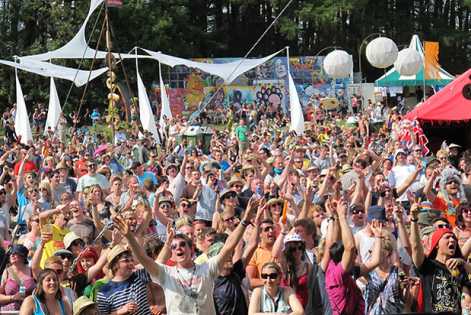 Geordies, Mancunians, Liverpudlians (Scousers) and the rest of a GB team headed last weekend to Lancashire to brave the rainy weather and deep mud, and rock at the best festival of the North.

The sold out event is based in Ribble Valley, a beautiful site known for its lush landscape. The camping area painted a picture of colourful tents, a lit-up stages and funfair visible from a distance, even in the rain.

This year the weather was certainly “typical” but Northerners and dedicated Beat-Herders are not made of sugar - rain wouldn’t melt the spirit and mud only added more silly fun to the gig. Armed with wellies, umbrellas and rain coats we all braved the weather and saved the day and night of frolics and festival shenanigans.

The line up was very impressive. Headlining on Friday was Death in Vegas. Their ambitious and ambient sounds were overwhelming, leaving the crowds in a dream state, somewhere in the hazy twilight. Parov Stelar who followed on the main stage received very positive feedback; people were pleased and super chuffed with his performance. His band was swinging and jazzy, making good use of the woodwind instruments.

Alternatively there was Fake Blood’s set to enjoy in the magical scenery of the Toiltrees stage. Anticipated by many, it was interesting but not to everyone’s taste, the chin stroking brigade’s verdict was that the music was a bit “flat”.

This year smaller stages thrived; Happy Slap Boutique, placed right next to the “customs” had a refreshing electro sound – bouncy, glam and crunchy as DJ Steve SuperBox spinned  the records.

Stumblefunk tent was as always outstanding – this year blessed with a presence of the Almighty Goldie. Cleverly lined up at midnight after the headliners of the night – The Whip and Orbital, Goldie added a versatile touch of drum and bass which was very much appreciated without the need of compromising any of the other acts.

The imagination and invention of the festival attendees was shining through. Peeps were dressed as marines, sailors, animals, Indians or occasional Ali G creating a very upbeat jolly fun atmosphere. Nothing looks more entertaining than a bloke dressed as a chicken trying new dance moves he just invented that none of the people gathered in the tent have seen before.

Amusing as it was to watch the ravers, their dance routines and occasional slipping and slapping their backsides on the mud or even funnier frontal encounters, the music was the most important; it was first class - a real feast for ears.

The Whip rocked the main stage and swiped me off my feet with an energetic, up-beat and exciting performance. It was exhilarating, re-energising and left the crowd buzzing. The Whip were on fire and so were we - the people at the main stage – red hot and ready for Orbital megastars.

Orbital came on stage with a very impressive light show that supported their new productions, promoting their new, first in eight years album. Nevertheless the peaking was when classics: The Beach theme tune and rave classics “Halycon” and “Chime” got everyone flying.Observing year on year the developments of the festival, I can only say that there is no surprise Beat-Herder was crowned one of the best dance festival by the Guardian and Observer in 2011. Slightly re-arranged but packed with impressive acts on every night it is a very desirable gig; organisation is impeccable, atmosphere very laid back and the possibility that it was the best festival weekender this summer seriously high!