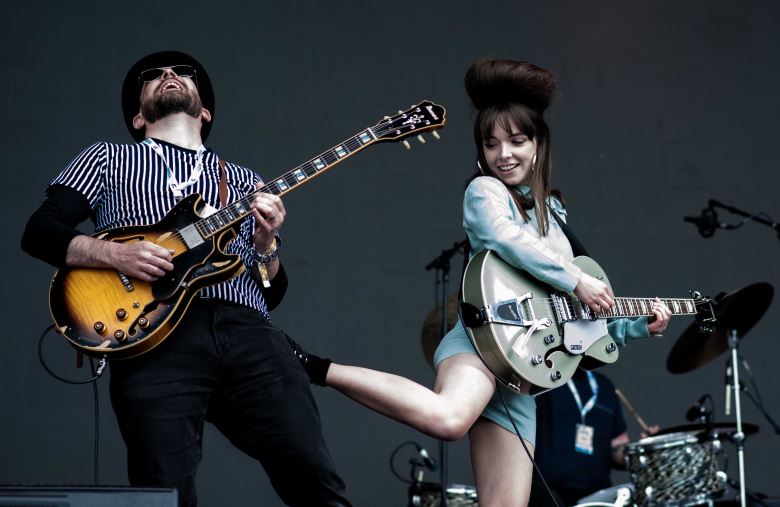 This years Bearded Theory was promising to be a particularly sweet occasion following several postponed attempts and subsequent cancelled re-arrangements due to the pandemic, all resulting in a two-year layoff for a festival that had been looking unstoppable over the last few years.

But weekend headliners including Placebo, Patti Smith, The Mission, The Hives and The Flaming Lips would ensure that the Bearded Theory faithful would be rewarded for their patience with a more than ample dose of the edgy / punky feel that has made this a multi award winning festival.

The festival officially opens Thursday, and going back a few years and this was just a bit of an add on for the early arrivals, with maybe an acoustic act on, but the campervan fields, that now stretch for acres, were virtually full by sundown Thursday this year! Having this extra day does make travelling a bit more palatable, as the M5/M6 is usually at a standstill on a Friday, but it also becomes a four-day endurance and at my age the art of pacing yourself comes into play! The evening’s entertainment for Thursday was what many festivals would call a premium line up including Dreadzone, The Dub Pistols, and Craig Charles, not bad for a warm up!

The main stage, or Pallet stage, seemed bigger this year, taller as well as wider, I don`t know if that was my imagination, but the site generally felt definitely fuller & possibly bigger, the usual fairground area had added attractions Waltzers and Dodgems, as well as some rides I didn’t want to stand near, let alone even think about having a go on!

The Earth area, set off to the side of the festival, gave an opportunity to get a bit of peace, while maybe having some holistic treatment, a card reading, or perhaps the chance to whittle yourself a new walking cane.

By Friday lunchtime the festival ground was buzzing, with all venues thundering out their own idea of what makes a great festival, and the punters filing in to find their feet and get their bearings while having their first taste of that Bearded Theory buzz for at least 3 years, with I`m guessing, many lapping it up the first time, and I`m just stood wondering what those newbies must make of it.

One thing that didn’t seem to have changed much was the gorgeous woodland stage, this beautiful, jewel in the Bearded crown has a rustic stage, fairy lights entwined in the trees, two bars, and a plentiful supply of toilets. Given the right entertainment, you could easily stay in one place all day, and with Wilko Johnson, Peter Hook, Craig Charles, as headline acts and other favourites Gaz Brookfield, Bob Vylan to name just a small few, I could see no reason why anyone wouldn’t.

The festival felt busier than I have ever noticed, with many people I spoke to feeling the same way, some suggested that the capacity had increased from 10 to 15 thousand!

The Maui Waui stage had its usual totally varied line up of bands & artists, Town of cats being a particular favourite of mine, although the tent is quite small, so a lot of times standing outside listening was the only option, and once you were outside the tent it was difficult to hear the band at times with the bleed over from nearby stages.

The site at Bearded Theory is very flat, certainly compared to many other festivals, and this makes it ideal for people who have mobility issues, or young kids that can`t manage the ups, downs and muddy slopes. There is also an “Accessible” camping area right next to the main arena, very easy to get to, but not great if you don`t want to stay awake till 3am waiting for the dance tent to stop banging.

The Knockerdown variety club was new this year, hosting some brilliant comedians, but again, unless you were actually under the canopy of the tent, which wasn’t massive, it was impossible to hear anything, other than music from other stages, which was a shame, because there was a lot of quality acts happening inside.

Convoy Cabaret had a good pitch, a decent size tent, just between the main campervan site and the main arena, home to the darkest side of festival life, with very little natural light and performances from bands called Dissident Noize Factory, Anarchistwood and Dogshite, a set of stocks outside, manned by bumblebees and a whole team of theatrical helpers that make this the kind of place that could possibly leave a sensitive mind with serious scars and lifelong flashbacks!

One stage that very rarely ever gets a mention on the line up here, but that is constantly packed, is the Something else tea tent, this is a stand-alone stage that visits other festivals and also hosts its own events, often home to performers who need a come down from their gig on the bigger stages, with many doing a low key acoustic set, anyone who’s feeling like it’s all a bit much and just needs a reset over a boozy coffee, but I guess most people just go to watch some great acts who maybe don`t get booked for the bigger stages.

One of the unique things that Bearded Theory offers and works very hard at, is the Children’s area, which includes an Ofstead inspected school, so you can bring the kids away to the festival with no fear of reprisals. I`ve never sat in on a lesson, but I’m sure it`s got to be a whole lot more fun than an average school!

There didn`t seem to be a fancy dress competition this year, which was advertised and for which a lot of people had obviously gone to great lengths in the hope of winning, I`m sure in the past it’s been tickets to next year’s festival, but the theme had been set as “Hero`s”, there was a few David Bowies, a group of Suffragettes, a couple of chocolate bars, Spidermen, and a child Freddie Mercury among the crowds. A bit of a shame, but I also didn`t see any beards this year, as there is usually an attempt to break the world’s record for the most fake beards worn in one place, in the past I have seen Lego beards, knitted ones and even a full length beard made from flip flops, always very entertaining.

Over all this was a brilliant weekend, with big names, great small name bands & artists, plenty of toilets, fast moving bar ques, loads for the kids to do, food vans like I’ve never seen here before, an insane amount of stages, considering the size of the ground, even really good weather, you would really have to try hard to get bored here and I absolutely can`t fault it, although this year it felt like a festival that is changing, getting bigger and better, in many ways, but perhaps a bit more corporate in its approach and possibly at the expense of some of the fun elements that I personally, have loved over the past 12 years or so that I`ve been coming.