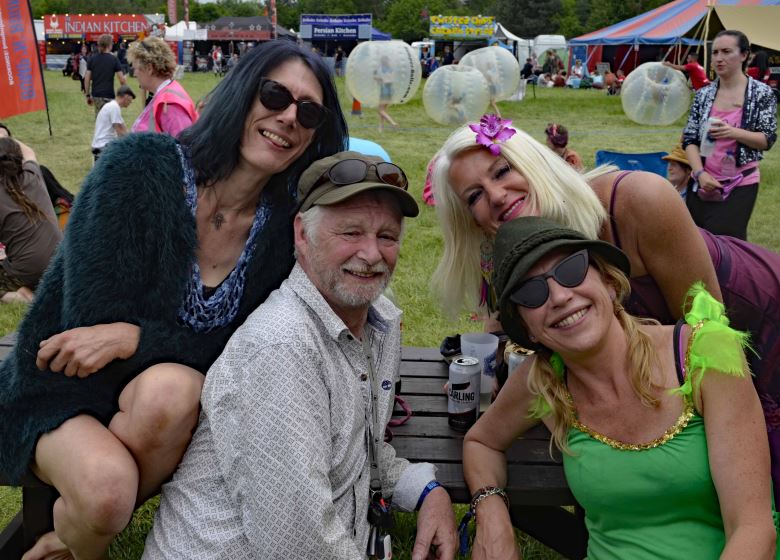 All tickets sold out, was the message on the Bearded theory website as I left home on Thursday, I’m not surprised at that statement, this is becoming one of the hottest tickets of the festival season and with so many great names and genuine legends on offer, it is seriously good value for money.

One of the things I love about Bearded Theory is that its early in the festival season and I, as well as most others seem visibly excited at the prospect of shaking off the winter cobwebs and getting in the swing of what looks like a great summer of festivals, that starts here.

Although there is always a great spread of styles at Bearded Theory, there is also usually a good helping of Goth, or Punk, this year is no exception, with bands like Stiff Little Fingers, the Angelic Upstarts. The Skids and Headlined on Saturday by The Cult.

Bearded Theory and what we see today at the festival has grown from the smallest of seeds, a birthday party at a pub and a very gradual increase year on year, the story is brilliantly documented on the festival website and gives you an honest insight into the problems and also the rewards of putting together an event like this.

Thursday night, which used to be a bit of a secret, with a few low key performances, that didn’t even get a mention in the programme, has now become almost a full on part of the festival, with
the camping and campervan fields reasonably full by late afternoon. The extra day, seems to have really helped with smoothing out the traffic flow and I cruised into the field at 3pm with barely another vehicle on the road.

The Woodland stage was where the action was at for Thursday night, this beautiful, unique, gem of a little venue is something I’m sure many other festivals must envy. During the day its shade is a welcome break from the sun, of which we were truly blessed with a good amount this weekend, a chance to feel among nature, with its own, very well manned, bar and rustic stage set up, but by night is stunningly illuminated and creates a perfect atmosphere for Thursdays headline act Faithless DJ set.

The Grounds of Catton Hall are literally crammed with stages for the weekend, impossible to watch everything, but with everything eminently watchable, the fact is you will miss more than you`ll see, so why bother stressing about what you might miss, there is so much going on, so many great bands and performers, and so many new friends to make in possibly the friendliest environment you will ever be sat in, it would be crazy to regret not getting to some of the outstanding performances I heard about from other people. I just make a note of the names and try to catch them next time

Friday saw all the stages open for business and the first of the big names and super cool roll in. The sound systems at all of the stages were top notch, but the Main, or Pallet Stage as it’s known, was exemplary, the first act that caught my eye here was Spunge, great songs, harmonies and on stage banter, they made light work of a sometimes difficult early spot on the line up.

Mad Dog McCrea followed, with their own particular brand of whiskey fuelled, “shake your ass music”, a very definite favourite of the festival scene, if they don`t get you fired up, you might as well go back to bed!

Many of the bands across the line up would be great headliners at any decent festival, none more so than Editors, who took to the stage just before 8pm to give an impressive display of why they have stuck around so long as a renowned live act, as well as producing number one albums.

Suede`s Brett Anderson, looking youthful beyond belief and clinically cool arrived on stage with an air of prime Bryan Ferry about him, as if time had stood still since the 90`s, Suede sounded just amazing, but the end of another festival day had arrived.

Subtle improvements had been made on last year`s festival, the healing field was larger and made room for the Pirate disco, the dance tent had been moved and didn’t bleed drum and bass across acoustic performances at other venues and there were screens either side of the pallet stage, which really helped during the big acts performances.

An unbelievable mass exodus from the main site to the woodland to see a punk double bill headlining Friday night with The Skids, flowed by Stiff Little Fingers. The atmosphere created by a capacity crowd in this area is something everyone should experience at least once in their life, word was that The Buzzcocks had originally been booked, but following the death of front man Pete Shelley late last year, the Fingers had offered to step in and as a tribute, the band were wearing Buzzcocks tee shirts, I was one of the unlucky ones unable to get in, so had to listen from the camper van field next to the woodland.

The food stalls were plentiful, varied and all good quality. No festival food is ever the price of a supermarket ready meal, but I didn’t feel like I’d been had here, in fact, I think it was called Yorky Porky who gave me the best meal I’ve ever had at a festival, a plate sized Yorkshire, filled with mash, topped with pulled pork, chips, a sausage, and then smothered in gravy.. Man, I could drink like a legend after that!

Saturday I spent I spent fighting with myself about which stage I would spend my day at, with so many recommendations I split myself between the Woodland for Seth Lakeman, Sophie Mahone at the Maui Waui stage, but settled on a blistering line up at the Pallet for the late afternoon.

Reef put on the stand out performance of the weekend for me here, known for pretty much one song, they have so much more to offer, so many great, great tracks and a stage presence that is hard to find an equal, followed by another favourite of mine The Easy Star All-stars, the Sherlock’s and finally, a band that I had always thought I had missed out on forever, legendary Goth Rockers, The Cult,  fronted by the super cool, Morrison (Jim, not Van)- esque Ian Astbury finished the line up on the Pallet, while Idlewild followed the Slow Readers Club to end proceedings at the Woodland

The fancy dress on Sunday is always a popular, well attended event, but this year’s fancy dress theme was “Disco” and seemed to be embraced like never before, with funky disco robots (I’m sure I’ve seen in previous years), hippies and a girl in a Disco crisp packet, such a party vibe about Sundays here, I think the theme helped this year.

One pretty unique thing this festival offers, is an on-site, approved festival school, meaning you can legitimately take your kids out of school and not be fined for being a bad parent, but when schools out, there is so much other stuff for children to get involved in, or you might simply consider educating them with some of what this festival does best, music.

Sundays Pallet stage line up was quality from the off and just got better, Dreadzone followed the Blinders and Steel Pulse warmed things up for Doves, who are recently re-formed since splitting in 2010 and on the comeback trail, so were keen to prove that they still had what it took, with a few people discussing the thought that maybe they should`ve headlined, but Little Steven And The Disciples Of Soul hit the stage like a New Orleans carnival sweeping into town, with a four piece brass section, beautiful 3 part harmony ensemble and that was on top of what people would`ve considered a full band on any normal day, the sound was immense. There were also rumours circulating that frontman Steve Van Zandt`s long time band mate Bruce Springsteen might be putting in an appearance..that didn’t happen, but it certainly showed a few sceptics what a quality band could do, finish a party in style.

Fireworks wrapped things up for 2019 and what a party it had been. It`s difficult to see how you can improve on something this good, the last couple of years have been massive in the Annals of the festivals history, so next year is almost certain to sell out early because to quote Steve Van Zandt (or as best as I can remember it!)  “this is no longer just a Bearded Theory, this is now a Bearded fact”.