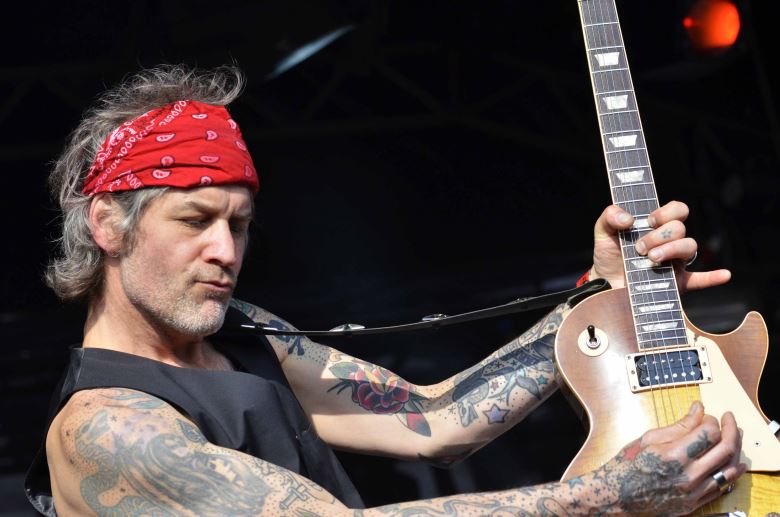 Now in its 9th year (although, some purists consider it the 10th apparently, due to the original party that inspired the festival to start, but let’s not over complicate the issue so early on!), Bearded theory festival has noticeably grown in size, certainly compared to my first visit 5 years ago, and is now in direct competition with many of the mid-sized festivals which probably inspired it in the first place. So having moved through the ranks so swiftly, is it punching above its weight? After what I witnessed this weekend, I would say a resounding NO.

This year I felt the organisers had filled many of the gaps that were evident at the festival since it moved to Catton hall 3 years ago, and the site was vibrant and really well balanced.

The kid’s area, or, children’s village to give it its proper title, was brilliant, with cookery, creative workshops, and Baby Boo on hand to cater for all baby needs, they even had the Bearded theory school, including PE taken by Mr Motivator!

Musically, this year’s line was one of the strongest I’ve seen, with cracking headline sets by the Levellers, Public Image Ltd, and Squeeze.

I think I probably saw more music this year than ever before, purely because there was just so much of it, but it`s impossible to see much more than a minute proportion of what’s on offer at this size festival, you`d run yourself ragged trying, and miss out on half of what’s going on around the rest of the site.

The music started on Thursday night with singer/songwriter Jemma Johnson, cheese- tastic Dr & the medics, and masters of skank punk, the dub pistols.

Usually, the Thursday night line-up is a low key event to satisfy the small number of early arrivals before the main festival starts on Friday, but this year, the site was half full, and the crowds certainly appreciated the early opportunity to get in the swing of things.

The camper van field was at capacity level, with an unofficial estimate of 1500 vans, most of whom were present by Thursday night it seemed.

The camping field was impressive, with tipi village, camping supplies shop and its own café, not that it was far to the festival ground eateries, but it all added to the completeness of the set up.

The music started in earnest Friday lunchtime, with all venues all thumping out their own sounds. The main stage kicked off with a well attended, very tight and well rehearsed set of great songs by local band, and national talent contest finalists The Red Monroes, but it was the later named bands, Reverend and the makers, Terrorvision, Killing Joke, and finally the mighty festival legends that are the Levellers who drew the big crowds out for the final mainstage goings on.

One of the most serene moments of the festival was at the stunning woodland stage on Friday night, as Turin Brakes, a band I never thought I’d get to see, played a simply beautiful set, effortlessly brilliant, 4 part harmonies and some great guitar, against one of the slickest rhythm sections. The sound and the surroundings were perfect for this type of acoustic based material.

Another really big booking on this stage was Saturday night headliner Jack Savoretti, having performed sell out UK tours, had a top 10 album, as well as numerous TV appearances, you could say this was a really good booking for the festival, and with the woodlands intimacy, it was definitely the place to see him. The women in the audience certainly seemed to appreciate a close up glimpse too!

Saturday afternoon on the mainstage, was the guitar legend, who having cancelled last years booking due to his well documented scrape with mortality, seems to have made the public appreciate what an emptier place the world would be without him, Wilko Johnson. Back on top form, and with the assistance of his trusty partner in crime Norman Watt-Roy, he blasted through recent material, as well as the old classics he wrote while a part of Dr Feelgood, to a properly packed field, now the festival was really gathering momentum.

I was surprised not to see a line up for the something else tea tent included in the programme, so it was a case of looking at a chalk board to see who was on there, without the benefit of a brief description, quite difficult to know what you’re going to like till it’s on, by which time it’s so packed, you couldn’t get in to see them!

This place is a fixture at many other festivals, as well as running its own festival at 3 different locations around the country. It specialises in bringing the slightly darker side of festival life, it also acts as a magnet to performers looking to get away from it all and provides, as the name would suggest, fine tea and cakes, as well as its fabled Boozy coffee.

The Maui Waui stage started off each day with a disco, then proceeded to give a right old mix of swing, gypsy jazz, folk, funk, punk, tramp & vamp. With performances by some of the more outlandish and unorthodox acts, certainly the place for the curious observer, with the likes of Electric swing circus, Smerins anti-social club, Barbarellas bang bang and Johnny and the sexy weirdos.

I shouldn’t forget to mention the magical sounds stage, a big top tent where you can seemingly go and listen to the same tune for 3 days & nights, the words of a friend quoting John Cooper Clarke kept resonating in my head “what are those young people doing? I’m just being facetious, of course (still doesn’t mean I understand it!) and it did seem very popular, another great example of the variety of entertainment to be found here.

The annual fancy dress and world record attempt for the most false beards worn in one place, was held early Sunday afternoon, won this year by the minions, after a hard fought and at times bitter contest with rival, backstage pass beard man (see photos)

Bad manners, From the Jam, Squeeze and finally Asian dub foundation closing the main stage. While the Woodland stage boasted, Keith’s big uke jam, John Otway, Beans on toast, and I couldn’t fail to mention a gig by the Barsteward sons of Val Doonican that left even them speechless at the sheer size, volume and enthusiasm of the audience, the impact these boys have wherever they go is utterly phenomenal. I suspect the trees are still creaking now from the aftershock.

But it was penultimate band on the Woodland stage, Stiff little Fingers, that I was most looking forward to, having seen them in my youth, and then again a few years back on the main stage here. I knew it was going to be packed, and it was announced at the beginning of the gig, that the area was up to capacity and the gates were shut. A thrilling atmosphere of anticipation hung, as the bands arrival on this comparatively tiny little stage was sat out by an estimated 2500. Old punks, old punks wives & children, as well as the uninitiated and the inquisitive, saw the band launch straight into wasted life, followed by new tracks, tributes to Joe Strummer, and John Bradbury and the classics Barbed wire love, Gotta get away, Alternative Ulster and Suspect device. I’ve never seen so many people being collectively carried back in time, and may well have set a new record for the amount of wrong song words sung in the same place, but this was a fantastic Sunday night in the woods.

Over all, I heard very few complaints about anything across the whole weekend, the toilets could`ve been a bit more plentiful, but every ticket had been sold, the weather was festival perfect, and the whole world seemed to be in good mood.

In my opinion, this was hands down the best Bearded Theory to date, no doubt the weather helped, but the line up was strong, the site was arranged well, its flat and easy to get around, everything seemed to be catered for and I had a weekend that will be hard to beat this summer!