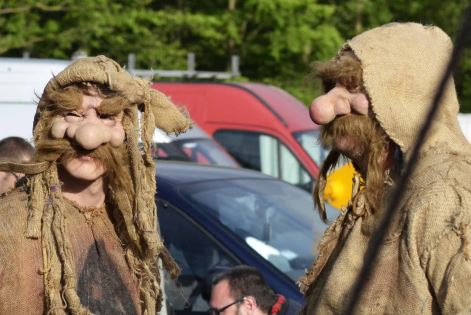 With so many festivals popping up, then disappearing each year, to get to the grand old age of 8 seems a strangely noteworthy achievement these days, and one that, along with multiple awards, a line up that gets stronger each year and the festivals 2nd year at its new home, would suggest things are going pretty well for Bearded theory.

Last year was Bearded Theory`s first year at Catton hall, and as you can imagine, a change of those proportions are going to be difficult to manage seamlessly in one year, so I was especially intrigued to see how this year would go for the Theorists, well it has to promise something special to drag me away from home on Eurovision weekend!

The line up this year, as always with this festival, was a good mix of styles across the board, but with a leaning towards the gothic, punky side, with main stage sets by the Mission, New Model Army, and a support to headliners James, by the Buzzcocks on Sunday.

Im often surprised that niche bands of this kind are still a strong enough draw for a family music festival to sell out a reported ten thousand tickets, but there was certainly no shortage of atmosphere and the site was a bustling sprawl of fancy dress, street entertainment, Beards and general revelry the whole weekend….so I stand corrected, although still surprised!

one of the jewels in the crown of Catton hall has got to be the woodland area, this is a beautiful little copse where the imaginatively titled “Woodland stage” is situated, the place is decked out with lights, bunting, a bar and a rustic looking stage, which all adds to the magical feel, especially at night. There was a brilliant range of music here and a good opportunity to shine for smaller artists like the Leylines, Jemma Johnson, and Joe Zeffa, as well as a chance to see intimate sets by established acts such as Neville Staple, Cara Dillon, and Bill Smarme. There was also great fun stuff going on here with the annual event “Keiths big Uke jam” and this year Mr Motivator was on stage for a bit of a Sunday morning work out.

Although they didn’t seem to appear in the program, I saw three sets by a great little band called “Electric river”, one of which was on the main stage, and one was in the Something else tea tent, which had the addition of the Something else big top stage as part of its set up. This boasted a phenomenal line up for a small stage, with Levellers front man Mark Chadwick, Gaz Brookfield,  Hobo Jones and the Junkyard dogs, Ned Dylan, Ghosts of men, Abdoujapaorv, and 3 Daft Monkeys amongst the dazzling mix of performers.

But the main stage line up is what draws the general numbers in, and this years was as good as any ive seen here at Bearded theory, with among others, sets from Alabama 3, Hugh Cornwell, Afro Celt sound system, New Model army, The mission, the Beat and finally on Sunday night James, probably my favourite band on the main stage line up, with a back catalogue that even my mum would recognise and some great early stuff too, they just sounded magnificent, kicking off with front man Tim Booth delighting the crowd by jumping straight on to the front barrier and launching into one of the bands biggest anthems “sit down”,  and as the daylight faded, the lights, the amazing sound, the songs and the frantic on stage dancing kept a, by now, freezing capacity crowd enthralled until the end and made it a moment to remember.

The fancy dress was well participated this year with the theme being pirates, but with a whole manner of associated themes being displayed from skeletons, to well im not really sure what some of them were?!

There was also the annual event that has become an integral part of this festival, and that’s the Bearded theory Beard contest, where each year they try to break the record for the most false beards worn in one place, im never sure if they’ve ever broken the record, if they hold the record, or if no one actually knows what the record is, but its great fun and was won this year by a beard made of lego!

I get the feeling a lot of effort has been put into making the festival fit the new ground this year, which has paid off, the toilets were plentiful and remained clean all weekend, there was always plenty of places to sit down, to get a beer, a coffee or a snack, a really good selection of food vans too.

I would imagine the folks at Bearded HQ will manage at least a smug grin to themselves when they finally recover and re-group for the post festival catch up, no mistake, this was a cracking weekend.