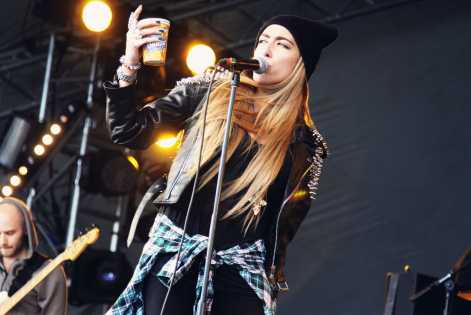 Beach Break Live had put together its biggest line up in its 6 year history and the torrential rain wasn’t about to put a downer on it. The soulful voices of Delilah and Maverick Sabre got Friday off to a flying start similar to the tents that took to the skies that night with the former enchanting the audience with her rendition of ‘Go’ and ‘Breath’ reminiscent of an early Amy Winehouse (we caught up with her later for a quick interview too!). Chase and Status weren’t about to be outdone by the new kids on the block though and pulled out a headline worthy performance to bring the main stage to a close before the crowds descended on ‘Merlin’s Forest’ – hosted by MistaJam’s Speakerbox - for a barnstorming set by Nero with their unique brand of Drum n Bass.

Day two took the baton and ran with it, boasting arguably the strongest line up from the opening act Levi Roots surprising most of the audience with a rather good set that didn’t just consist of his ‘reggae reggae sauce’ song complete with a 10 piece backing band. Brothers and Bones, heavily tipped as one to watch for the coming year roared thru the rain but you get the impression they where the odd one out in a day consisting of so many heavy weight urban acts including Ghostpoet, Labrinth and Wretch 32 leading up to a middle of the road performance by the headline act, Dizzie Rascal amid suspicions he was unwell.

Dubstep pioneers Skream and Benga’s presence on the second stage (Merlin’s Forest) meant Rusko’s mysterious absence wasn’t missed with the Croydon duo whipped the crowd into frenzy and the latter premiering a few new tracks from his first solo album.

The weather took a turn for the better on the final day and after Saturdays heavy bass, the chilled atmosphere and McDonalds van handing out free ice-cream where a welcome change of pace.  Abandonman captured the mood perfectly with his superb blend of comedy stage antics and improvised rapping, bringing on a few random audience members for a spot of giant Connect 4 and songs about gorrilas. Ben Howard and The Maccabees ser hearts aflutter as usual before Friendly Fires bucked the chill-out trend in fine style with a trail blazing set led by their manic frontman Ed Macfarlane’s weirdly mesmerising dance.

By Monday morning, the sun was out, the brave souls who made it thru the weekend looked pleased with themselves and a solid majority of the acts delivered in spectacular fashion including a good few surprises and we could be seeing Beach Break Live cementing a spot in student diaries over the next few years.