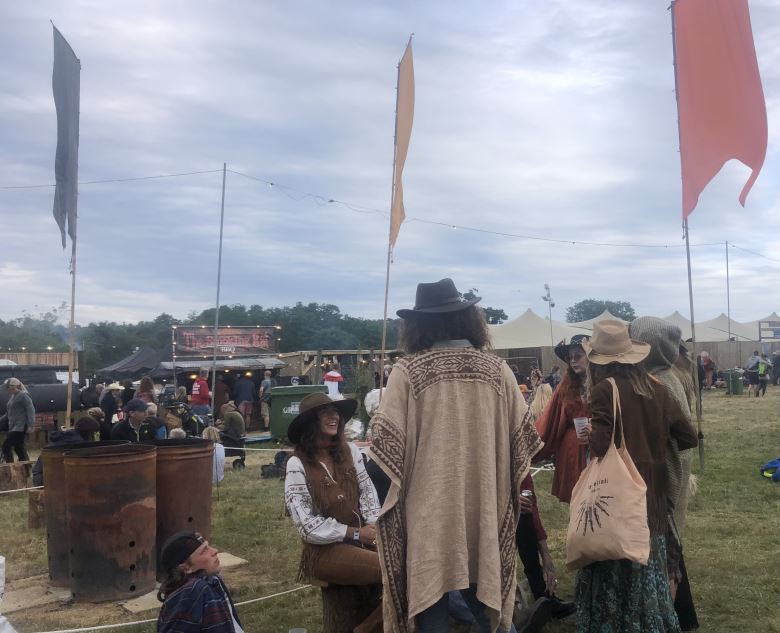 It seems that God is a purist when it comes to Americana. He/she/it/they/we – Christ, what pronoun to use? – brewed up one humdinger of a thunderstorm on the Saturday evening, stopping Scottish folkies The Waterboys from performing their headline act.

Oh well, I got over it. And so did Black Deer. Back after a two-year absence, this mid sized festival has carved out a significant niche for itself in the festival calendar. It’s far from the wildest of events and it’s certainly not the most hip, but the heart-on-its-sleeve appeal of country music in a beautiful setting somehow just gets under your skin.

I’m no expert on this genre of music and in some way that adds to the fun. There’s nothing like stumbling upon a set by someone you’ve never heard of and being utterly blown away. This year I was most taken by Irish Mythen, who played a barnstorming set in the snug Haley’s Bar. Fantastic stuff and politically right up my alley. Police Dog Hogan also got people stomping and William Prince was a laid back delight. Or was it Prince William? If so he’s put on a few pounds since the jubilee.

A particular treat at the festival are the daily Songwriter Sessions, where three or four of the performers sit together and play their songs unaccompanied before their main sets. Previously I’ve often been deeply moved by these intimate sessions, but this time a little less so, perhaps because they took place in the Ridge this year, the second largest of the seven or so festival venues. More people could enjoy them than before but the sense of intimacy was a little lost.

It probably didn’t help that I was cold. The near 30 degrees of the Friday had lulled me into bringing a selection of clothes that weren’t entirely suited to the circa 18 degree peak of the rest of the weekend. Fortunately I was thawed – emotionally at least – by the music and by the quite gorgeous setting of the festival. It’s Sussex countryside at its best.

Overall Black Deer is an extremely well organised festival and this certainly adds to its relaxed and friendly atmosphere. While there are a fair few young people around, the primary age range is 30 upwards. There are also quite a few children about and the festival does an excellent job in providing a variety of supervised activities for them, allowing their parents to go off and enjoy themselves elsewhere.

The bars onsite are well stocked and attractive and the queues are not too long. The prices are reasonable, albeit it’s irksome to have to spend a non-reclaimable two pounds to buy your glass for the weekend. The selection of food stalls is also really good; although they’re a little more meat orientated than most festivals I go to (it is Americana after all). The eclectic clothes, jewellery and other stalls are stocked with an interesting array of goods, particularly if you’re after cowboy boots or a Stetson. An impulsive festival acquisition if ever I saw one.

What else? Getting more prosaic, the loos and showers (there are never enough showers at festivals) are clean and the camping areas well set out. I do have two gripes though, and I know I am not alone in this. The festival is not only cashless but you have to put your money onto a digital wristband. This is a pain in the backside and at times it’s hard to upload money due to a variable phone signal. For me cash should be possible - do we really want to encourage a cashless society? Failing that, credit cards should be allowed. The wristbands detract from the sense of freedom that is surely an integral part of the festival scene. The second gripe is more straightforward: more regular shuttle buses are needed to and from Tunbridge Wells’ station at peak times.

Leaving that minor rant behind I really like Black Deer. It’s not my natural environment perhaps but each year I find something – often many things – to love there. It’s a life affirming friendly festival set in beautiful countryside. I’m hoping to return next year.