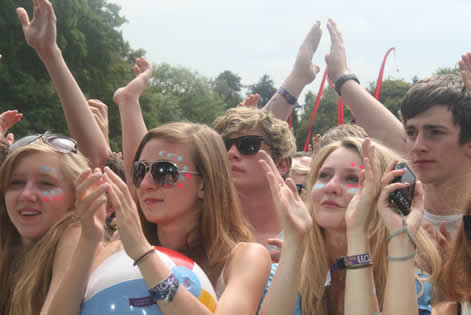 Set in the picturesque country side of Winchester, lies a festival called Blissfield’s.  This being my first ever festival I had no idea what to expect when I showed up on Thursday to collect my passes.  I was greeted with a little bit of what I call organised chaos! With people not being in the right tent to having to wait to certain time to get my passes, but finally I had them. Feeling a little bit like it was first day at school, I was greeted with smiles and a cold largar. Something I could definitely get used to!
Being new to the scene didn't damper my excitement and nerves and as I watch people getting excited for bands I’ve never heard as I started to get into the festival spirit.  Which by the end of the weekend had left me wanting more; I had caught the festival bug!
With more musical genres thrown at you in one festival, this really is a music lover’s paradise.  Weather you into Rock, Ska, Hip Hop, Country, or a mixture of everything then this was the place to be.
Coming with a family, or a group isn't a problem either, as they have their very own children’s area for the little ones. Which this year included special guests from Cbeebies.  With its chilled out atmosphere and parties into the night, everyone is certainly catered for.
With standout performances from King Charles, a personal favourite of mine, and now my new band to look out for.  They got the crowd going with their well known songs, and will always stick on my mind as one of the only bands to climb the rigging at the festival and sing from it, stand out moment right there for me.  That was certainly a way to introduce me to the world of festivals.
Imperial Leisure certainly brought the fun into festival with water pistols, beach balls, Roses and Champagne.  It was a fun atmosphere that really got the Saturday of to a flying start.
Dub Pistols with their mix of Ska and Hip Hop, this band really had it all.  From downing a bottle of Bacardi on stage, to throwing beer at the audience this band worked the crowd up into frenzy.
Also a special mention to Gold Panda and David E Sugar, who really got things bouncing in the Bradley bubble tent in the early hours of the morning.
But if you were looking for a party well into the small hours of the morning then an area called The Hidden Hedge would be the place to head.  During the day it was a peaceful place to sit down and relax, but by night fall it had transformed into an all night party tent.
If you were looking for a quieter setting then Emily and The woods and Polly and the Billets Doux, would be what you are looking for with their soulful voices and relaxed style, they brought a chilled out atmosphere to the proceedings.
I found, that this being my first festival of hopefully many was a festival where you dressed up; face painted and danced your way through the musical madness.  It was a whirlwind adventure and culture experience that I wasn't expecting.  You knew that as soon as people stood up and came towards the stage, something good was about to happen.
When you couldn't find any live bands on stage, a DJ would come on and fill the gaps with feel good tunes, which got everyone up on their feet and ready for the next act.
Along with the well established firm Favorites with the crowds, comes fresh new talent which was showcased on the Bradley Bubble stage in the form of Bear Cavalry, fresh from winning the chance to play at Blissfield’s Festival.  These guys are the future with their indie sound with a twist and tons of attitude to boot!
The disappointment for me was the headline act Tricky on Saturday night who closed the festival.  For me I just didn't think that they were as good as I was told, and a few other people agreed with me.  Also only being allowed to take photos from the side of the pit was a disappointment as only a select few where aloud in for a very short period of time.
So instead I headed over to the Bradley Bubble stage where I found I dream in Colour playing.  I found this band to be entertaining and engaging.  As they encouraged the crowd to make more noise that the main stage! Despite Tricky who was playing on the main stage at the same time as them I thought this band was impressive and put on a really good set of well-constructed indie melodies.
With my festival whirlwind over I headed back to my car and drove off into the night, with my head filled with excitement and wonderment.   Blissfield’s is the place to be if you want every type of music you can get your hands on in one place.  You party, you relax but mostly you have a really good time.  Would I go again absolutely, would I go to different festivals, defiantly!  But would I consider camping out at the next one.....I'll have to get back to you on that!