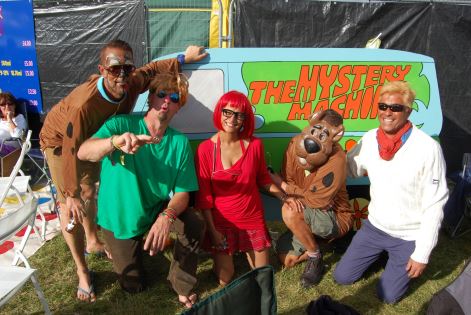 80s festival Rewind went off with a boom this weekend – and it wasn’t the fireworks – it was the Boomtown Rat himself, Sir Bob Geldof!

Making an expletive-strewn first appearance at Rewind, the controversial die-hard rocker certainly made the 40,000 strong crowd take notice on Sunday as he exploded onto the stage.

Proving to be the Marmite of the festival – the audience either loved him or loathed him – the zany frontman could be heard swearing in the wings, even before making an appearance.

But his most famous hits including I Don’t Like Mondays and Rat Trap were well received by the 30 and 40-somethings reliving their misspent youths.

The Boomtown Rats were not the only act to debut at the retro 80s extravaganza. Tom Bailey of Thompson Twins fame made a welcome return to the public arena after a gap of 27 years.

Headlining on Sunday, Tom played an atmospheric set which included hits such as Doctor Doctor, Hold me Now and In the Name of Love, as the chilly evening drew in upon the crowd.

For the most part, revellers enjoyed a sunny weekend with a quick succession of acts cranking up the temperature as well as the volume.

Opening the whole weekend with a nod to the mods, was From the Jam, featuring original Jam bassist Bruce Foxton.

Strumming their way through a set packed with 80s classics such as Going Underground, That’s Entertainment and Start!, the band got the fans moshing on the field.

Other notable acts were Haircut 100 frontman Nick Heyward whose boyish charm and uplifting hits had the crowd feeling nostalgic.

Level 42 gave the ladies some Lessons in Love and Martha Wash of the Weather Girls had the fans holding up umbrellas in unison when she belted out her enduring hit, It’s Raining Men!

Sister Sledge brought a real summer feel to the occasion with their medley of hits including We Are Family, while Rick Astley had the whole festival up and dancing to Never Gonna Give You Up.

Speaking before he went on stage, Rick said that he felt lucky to still be playing his hits to a welcoming crowd, more than 25 years after he burst onto the pop scene.

He said: “The 80s gave me the life that I’ve had and I wouldn’t swap that with anybody. I’ve been unbelievably lucky in so many ways.”

And Holly Johnson rounded the night off with a bang as he performed his stratospheric hits – Relax and Two Tribes. The tempo changed dramatically with his haunting rendition of Power of Love.

The South (the Beautiful South back in the day), proved to be a class act, performing sing-along classics such as A Little Time, Perfect 10 and Don’t Marry Her.

Sunday’s stellar line-up also featured husky-voiced rocker Bonnie Tyler, winning the crowd over with Total Eclipse of the Heart and I Need a Hero. And 80s fans knew they were onto a Good Thing courtesy of Roland Gift from The Fine Young Cannibals whose voice is as strong as ever.

Turning circles on the stage in his inimitable style was Jimmy Somerville with songs such as Don’t Leave me this Way and Mighty Real, while sharp-suited Tony Hadley delighted with his Spandau Ballet classics – Gold and True.

One of the highlights of the day was UB40 whose string of well-known hits and reggae beat struck a chord with the sun-drenched audience.

Kingston Town, One in Ten and their chart-topping hit Red, Red, Wine went down a storm with the crowd who were downing their own red wine, amongst other drinks!

Apart from the music ending, the only other annoying aspect of Rewind 2014 was the lack of stewards ensuring chairs were not placed in the standing-only area in front of the stage.

There is nothing worse than a network of deckchairs preventing you from hero-worshipping near the front. We know us 40-somethings like our comforts but note to next year’s couch potatoes – Get Outta Your Lazy……..chairs!

By Sue Archer and Leigh Adams