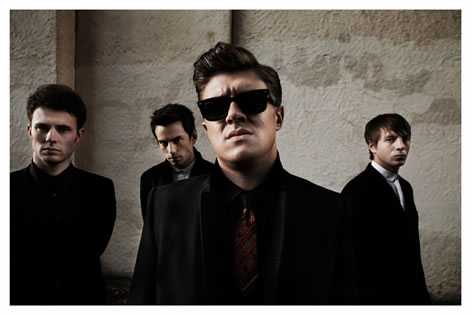 Tipped for a major breakthrough as one of XFM’s 12 for 2012, All The Young will released their new single ‘The Horizon’ on March 26th on Warner Bros. Records, with the video going live today, 31st Jan.
Recently seen on stage as guests to Morrissey, The Courteneers, The Wombats, Hard-Fi and The Pigeon Detectives, All The Young are on a run of eleven dates with the Kaiser Chiefs which has seen them ecstatically received by the Kaiser’s fans. This will then be followed by their own headline tour in March.
They’ll also headline a HMV Next Big Thing / XFM New Music Award night at Manchester’s HMV Ritz on February 8th and the This Feeling club night at the Queen of Hoxton on February 11th.

Watch the Video for 'The Horizon'

“Those present will be able to say they were there when the new guitar revolution kicked off." – NME live review
“All The Young bring a touch of second album Clash and mid-period Manics to their rousing, anthemic songs” – Sunday Times Culture
“Set to ensnare a new generation of indie-heads.” – The Daily Star
“I loved it because it reminded me of the early Smiths days.” – Morrissey on All The Young’s gig at the Proud Galleries

Published on 31 January 2012 by Wayne Feltham