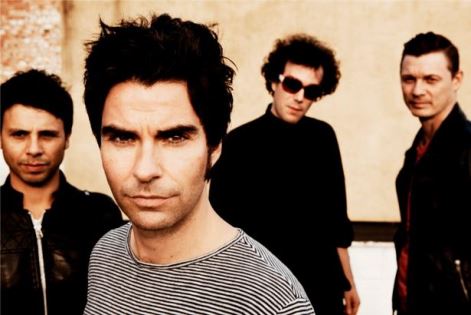 The Isle of Wight Festival today announces that UK rock heroes Stereophonics and electronica dance legendsFaithless are to co-headline on Friday 10th June.

Giving the festival a massive injection of memorable anthems and electrifying electronica, the two British favourites will ensure a spectacular start to what is the first festival of the summer, ahead of a full weekend of live music and entertainment.

Stereophonics’ Kelly Jones said: “I love playing the Isle Of Wight Festival. I got to steer the boat over last time. Captain of the ship and honked the horn! Only the captain gets to honk the horn. This will be our third time at the festival.... I'll leave my white suit at home this time though!”

Faithless said: "We cant wait to return to play such an iconic festival for the second time. We were proud to be part of its relaunch in 2005 and it's an absolute pleasure to be invited back.”

Festival promoter John Giddings said: “We are delighted to welcome Stereophonics and Faithless back to The Isle of Wight Festival to co-headline the Friday night. Stereophonics continue to prove they are still on top with a new No. 1 album and they are absolutely brilliant live. Likewise Faithless, who are currently celebrating their 20th year, have had hit after hit, and I know the crowds at the festival are going to go crazy when they bring their live set up to the Friday night. Looking forward to catching their sets!”

Without doubt one of the UK’s best bands, Stereophonics recently scored another No. 1 album with their latest release ‘Keep The Village Alive’. Their achievements over the past two decades are many; six No. 1 albums, 26 Top 40 singles, including the No. 1 hit ‘Dakota’, and wide acclaim for their live performance which has seen them become a firm festival favourite. Armed with new hits C’est La Vie, I Wanna Get Lost With You, Song For The Summer and classic songs such as ‘Local Boy in the Photograph’, ‘The Bartender and the Thief’, ‘Have a Nice Day’, ‘Dakota’ and more Friday night will be a fantastic evening. British electronic dance icons Faithless created club classics such as ‘God is a DJ’, ‘Insomnia’ and ‘We Come 1’ and have sold over 15 million records worldwide. To celebrate their 20th anniversary the band created a special remix album ‘Faithless 2.0.’ featuring remixes from some of the biggest DJs today including Avicii, Tiesto, Eric Prdyz and Armin Van Buuren paying tribute to their enduring legacy.

2016 will mark the 15th anniversary of The Isle of Wight Festival since it was successfully relaunched in 2002 to become one of the most exciting weekends of the summer, with a proud heritage of show-stopping headliners such as Foo Fighters, The Rolling Stones, The Killers, Paul McCartney, Coldplay, Blur and Fleetwood Mac.

The Isle of Wight Festival takes place 9th-12th June at Seaclose Park, Newport. From Main Stage headliners, acoustic sets, DJ performances and up-and-coming talent, alongside a huge variety of additional entertainment and activities such as the Bohemian Woods, Kashmir Café and Hipshaker, there’s something for everyone to escape from everyday life for that one weekend in June. Summer starts at the legendary Isle of Wight Festival, all the biggest names in music: one unmissable weekend.

A full range of ticket, travel and camping / accommodation options are available for The Isle of Wight Festival from www.isleofwightfestival.com.

Published on 30 November 2015 by Ben Robinson