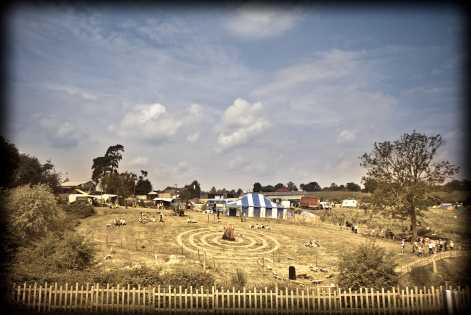 Nozstock Festival takes place just outside Worcester, and will be held over the last weekend in July. We managed to secure an email chat with Ella Nosworthy, the Festival Coordinator.

How was the festival originally started?

It was a BBQ that just got out of control. We thought it would be fun to have a party for all our friends, put a band on and everyone had a great time. We decided we'd do it again the next year, added a few more bands, some friends bought their friends and it grew organically like that over the years. It got to the point we realised we had 1000 people on the farm and bands all day and kind of realised we were holding a festival by accident. We decided we had to make the decision to either get a license and do it properly or knock it on the head...

What would you say the overall ethos of the festival is?

Hmm, eccentric is definitely part of it. But then there is also this really excited, up for it feeling, like people have literally been waiting for it all year and are just so ready to have fun. Also it feels very homemade. A lot of people have commented on that. There are a lot of personal touches and you literally are dancing in our garden, right next to the house.

How did you think last year’s festival went compared to previous years?

Really well, I think 2011 was the best so far... The acts were great, the people were friendly and it's always nicer when its sunny.

What are you changing for this year and what more would you like to see happen?

We have added another night of cabaret, because it was so popular last year, so Friday night is all about Burlesque. We are also having sound art at the festival which will be really interesting. For people that attended last year, we have developed the area by the smaller lake, I think that is going to be a great addition. I can't say too much though. In regards to what more would I like to see happen, we are trying to focus more on green awareness for 2012. We took a big step up in 2011 with our clean campsite competition and cycle challenge so I would like to build on that I think.

Who are you really excited about performing this year?

I'm always excited about Andy C playing so I'll definitely catch him. The Correspondents. They put on a great show. Tricka Technology will be epic. We have some great spoken word artists like Ifor Thomas as well so really hope I'll get time to watch some of that. Miss Betty Blue Eyes in the cabaret tent. I've heard great things about her...I can't pick just one!

Where do you see your festival going in the future?

To be honest I just see us building and improving on what is already in place. We have no plans to get any bigger at the moment, we are happy as we are. Hopefully we can continue to be a eclectic, unusual event that gives people a weekend to remember...

There are some amazing DJ’s playing! Are you hoping for packed tents?

Our DJ line up is always really popular and I think people like dancing in the barns so it does get pretty packed in there. You can see a lot of the staff, timing their breaks with their favourite DJs. :) This year we are putting up screens so that people can dance outside as well and have a bit more space...

Nozstock invites you on a journey ‘Through The Looking Glass’ embracing everything wonderful about English eccentricity and eclecticism whilst encapsulating the true spirit of fun and adventure. Initially started as a ‘barbeque on the lawn’, the last few years have seen this festival blossom into an eight-stage three-day extravaganza with a world-class array of bands, DJs, comedians and performance artists.