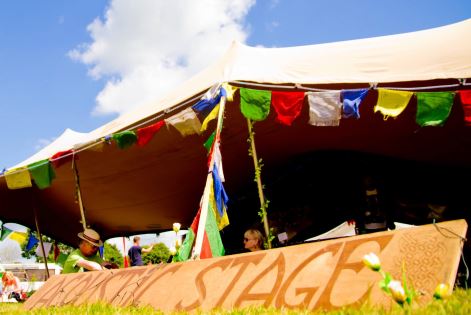 The Willowman Festival has unveiled its new expanded acoustic tent for 2015. The acoustic shows will now take place in a large Bedouin-style Berber tent with an array of talent including guitar George Borowski.

As well as the acoustic shows the bigger tent will host a comedy bill and for the first time the grand final of the Amp Awards which showcases music talent from schools across Yorkshire.

Goth favourites The Skeletal Family will also be making a guest appearance with a stripped down acoustic set.

As in previous years the Creative Intentions Café will be serving hot beverages, cakes, veggie snacks and dinners and for the first time this year there will be a small bar in the tent.

Festival Director Steve Williams said: “Comedy was once described as the new rock n’ roll and while I’d argue it isn’t, it has certainly become a regular part of festival line-ups across the country.

“We are currently working with a number of comedy clubs to prepare a line-up that will break up the music sets in the acoustic tent and raise a titter or two in the process.

“The acoustic tent at Willowman has evolved over the years and this year we will have a bigger performing area and we have upped our game in terms of the quality of the line-up. “We are also really pleased to welcome the AMP Awards to Willowman which not only encourages musical talent it also teaches kids about the mechanics of the industry and how to stage events. You don’t have to be a star to work in the music industry. “I think however people will be very impressed with the musical quality of the young bands in the final – not to be missed.” As well as providing a healthy music line-up the acoustic tent will also holding morning Yoga classes.