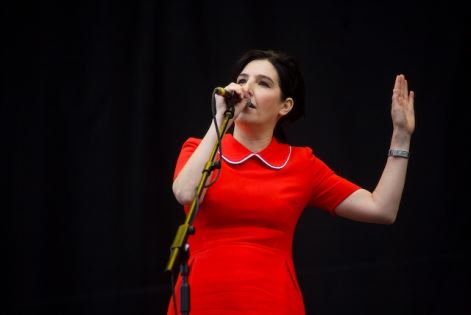 Texas played T in the Park’s Balado debut back in 1997 – the same year their massive number 1 hit album White on Blonde catapulted them to global success. They returned to headline in 2001, and are set to play a huge homecoming show at the festival’s 20th year celebrations. After a 6 year hiatus, they release a brand new studio album entitled The Conversation on 20th May, and will showcase their long-awaited new material as well as treating fans to massive anthems such as I Don't Want a Lover, Say What You Want, Black Eyed Boy and Halo when they return to T in the Park in July.
Maryland rapper Logic’s recent rise through the industry has seen him snag a 2013 Freshman spot in hip-hop bible XXL Magazine, sign to Def Jam and work with No I.D. (the veteran producer and now A&R figure who helped mold the careers of Common and Kanye West). He makes his T in the Park debut this July.
AlunaGeorge are being tipped for big things this year, after they enjoyed huge success with their track Attracting Flies. They featured 2nd in the BBC’s Sound of 2013 list (after fellow T in the Park act Haim, who topped the list) and their hotly-anticipated debut album is due for release this summer.
Birmingham’s Laura Mvula is also one of this year’s hottest new stars. Her debut album Sing to The Moon shot into the top 10 in March and she gained critical acclaim with a coveted Brits Critics' Choice nomination.  With her UK headline tour gaining rave reviews, her unique vocals and jazz-meets-soul style are set to go down a storm in Kinross this July.
Earlier this month, LA rockers Deap Vally opened for fellow T in the Park act Yeah Yeah Yeahs in Las Vegas and absolutely smashed their set at Coachella. Next stop is Kinross, when they bring their raw rock ‘n’ roll sound (created with only a guitar, drums and vocals) to the 20th year celebrations this summer.
Alternative-indie duo Jagwar Ma are Sydney’s answer to Madchester and as a result are causing a stir with their debut single, The Throw. With their 90’s inspired tracks Jagwar Ma are tipped to be huge in 2013.
Scunthorpe’s Ruen Brothers uploaded their track Aces to BBC Introducing on Radio Humberside in January and have been causing a stir ever since. The hotly tipped sibling duo are sure to get the crowd going with their 60s-esque rock ‘n’ roll.
New York’s MS MR went down a storm at SXSW slot in March, with an incredible set sure to follow at T in the Park’s 20th year this July. Their debut single Hurricane created a huge buzz in the blogosphere, with their first album Secondhand Rapture set to propel them to greater levels of stardom when it’s released in May. They’re most certainly ones to watch at T in the Park 2013.
US rap sensation Brooke Candy was first discovered after appearing in Grimes music video and was described by Vice Magazine as “the post-apocalyptic Lil’ Kim”; she has opened for the likes of Azealia Banks and put on an explosive performance at the NME Awards Show in February.
Josephine is a soulful chanteuse from Manchester, whose self-reflective debut album Portrait was voted in the top 50 albums of the year by Q Magazine, with the title hailing her “an extraordinary talent.” She’ll showcase her soulful vocal prowess when she makes her T in the Park debut this July.
Over 85,000 festival-goers per day will descend on Kinross over 12th – 14th July for the 20th year of T in the Park, which will feature some of the greatest acts, including headliners Mumford & Sons, Rihanna and The Killers, plus Frank Ocean, Snoop Dogg, Beady Eye, Foals, alt-J, Yeah Yeah Yeahs, The Courteeners, Jake Bugg and The Lumineers, plus many more still to be announced.
Fans can guarantee they’re part of the 20th year of T in the Park by getting their tickets now from www.tinthepark.com or www.ticketmaster.co.uk or by calling 08444 999 990. Experience the 20th year of T in the Park and join 85,000 music lovers per day as part of the greatest audience in the world this July. Boutique camping options in The Residence are also available for those looking for luxury living at T in the Park – check out www.theresidenceexperience.co.uk