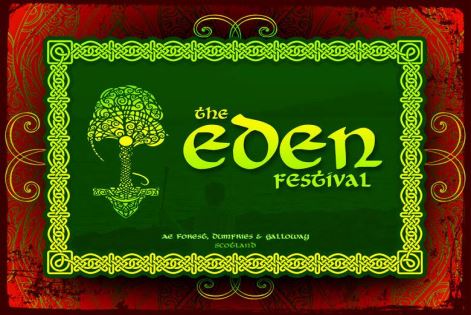 Eden Festival goers are being encouraged to don octopus legs, diving suits, bathing costumes and other nautical outfits to take part in their ‘Under the Sea’ fancy dress theme.

Dressing up is a big part of the Eden Festival experience, where the audience provide as much of a spectacle as the various structures and art installations dotted around the site.
Mary Munroe aged 24 from Dumfries said “my friends and l cannot wait to get onto the Eden site in our mermaid and sailor costumes, we love dressing up and we love to party, Eden is our favourite Scottish festival by far”.

Event director Finley Becks – Phelps commented “Eden is now in its fifth year; we attract an audience from all over the UK and increasingly from the towns and villages of Dumfries and Galloway. Everybody needs to let their hair down in the summer months and what better way to do this than by getting dressed up at Scotland’s funkiest boutique festival”.

Eden Festival takes place on the meadows of Raehills, situated just off the main road which runs between the South Western Scottish towns of Dumfries and Moffat. The three day celebration of music, art and mischief is fast gaining a reputation for being the freshest, most colourful new festival in Scotland.

An eclectic mixture of families, urbanites, hipsters, festival enthusiasts and music lovers make the annual pilgrimage to enjoy the mix of music, comedy, cabaret, games, theatre and celebration, unlike no other.

French Electro swing maestros Caravan Palace will be swapping the bustling streets of Paris for the tranquillity of rural Scotland to headline the 2013 Eden Festival. Although not yet a household name in the UK, Caravan Palace have had massive success on the British and European festival circuit, headlining many of the larger festivals down south. They also enjoy huge support in their native France and on the European mainland. Forties inspired dance, imagery and instrumentation blended with fat bone wobbling electronic beats ensures that Caravan Palace will be one of the more leftfield head liners on the British festival circuit this summer.

Sam and the Womp will bring a touch of instant recognition to the Eden Festival billing. They enjoyed recent chart success with their début single “Bom Bom”. A genre defying fusion of traditional Balkan and modern dance music makes Sam and the Womp an almost ideal booking for Scotland's premier boutique festival.

The legendary Craig Charles will be spinning his Funk & Soul Club back into life to entertain the Eden masses, no stranger to the festival circuit and hugely respected for his cult status both as an actor and DJ, Craig Charles is an important ingredient in this home cooked line up.
Festival producer Meredith Langley Vine commented “We attract a very mixed audience to our event, but they seem to fly under a flag of convenience which is about having fun and enjoying less commercial forms of music. Our 2013 line up reflects this and we will once again be working flat out to provide a unique environment for people to enjoy and escape the daily grind of 21st century life.

Back by popular demand, 80’s exercise guru and cult figure Mr Motivator will be on hand to rev up and inspire the crowd with his infectious enthusiasm. Figure hugging outfits and sweatbands will no doubt be the order of the day.

Slamboree are an act who perhaps, more than any other, sum up the ethos of the Eden Festival. Described as a Neo Balkan Pyro Rave Circus, as well as smorgasbord of circus performers, daredevils and entertainers the collective are a riot of colour and confusion, who take each show as it comes and ensures that every gig is different from the rest.

Other line up confirmations include Shy FX and Mc Stamina, Ed Solo and Deekline, The Correspondents and the Electric Swing Circus.