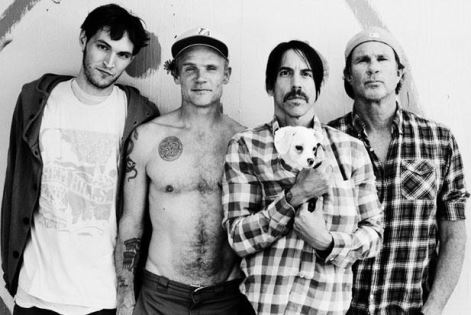 The Isle of Wight Festival 2014, are extremely excited to announce a UK & Ireland exclusive performance from the award winning Red Hot Chili Peppers.

Road Trippin’ to the Otherside of the Solent to headline our Main Stage on Saturday 14th June, this will be their ONLY show of 2014 on our shores. What’s more, it’s the first UK festival appearance from the critically acclaimed quartet since 2007, yes 2007! Don’t miss your chance to be there…tickets are on sale now, head to www.isleofwightfestival.com.
Red Hot Chili Peppers said: “To headline the Isle of Wight Festival is a once in a lifetime opportunity, following in the footsteps of Jimi Hendrix and The Doors. When we were offered the slot, we jumped at the chance…it will be our only show in the UK/Ireland this year…so we intend to make it really special.”
John Giddings, the Festival’s promoter said: “Finally- we’ve got them! One of the most exciting rock bands of the modern era come to visit…and judging by the performances I have seen previously, will be a highlight in the music history of the festival…Rock the Wight!”
Having released a staggering 10 studio albums, Red HotChili Peppers have won over a generation of music fans from coast to coast. Since forming in 1983, their definitive sound has propelled the LA four-piece to become one of the most diverse and successful bands performing today. Now, they’re ready to take the Isle of Wight Festival by storm on Saturday 14th June…Bring it on.
Red Hot Chili Peppers will be joining an already scorching line up, which features an English festival exclusive from Friday Main Stage headliners Biffy Clyro, plus superstar Calvin Harris who closes the night; there’s even a special guest set from electronic outfit Rudimental. With more performances from Passenger, The 1975 and The Waterboys, 2014 is shaping up to be one of the biggest yet. We can’t wait to see you all in Seaclose Park from 12th – 15th June.
With fields full of new and exciting things, expect an incredible mix of fun, surprises and hidden treats ready to be discovered, as well as some old favourites. There’s loads of accommodation, from camping to glamping, so round up your mates and get ready to set sail on a mini adventure you won’t forget in a hurry.

Published on 30 January 2014 by Ben Robinson