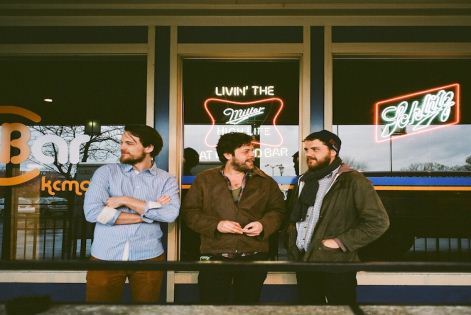 Fresh from recent support slots with Iceland's Of Monsters & Men and the Smoke Fairies, Bear's Den have this morning announced details of their debut UK headline tour.

The London-based trio Bear's Den comprise of Andrew Davie, Kev Jones & Joey Haynes have also confirmed that they will be opening for Mumford & Sons at the second sold-out O2 Arena show of their Tour Of Two Halves in London on the 18th December.
Andrew Davie, the band's lead-singer and songwriter said “We're so excited to get out on the road for our first headline tour and to be able to share all of the new music we've been working on for the last couple of months. Supporting Mumford & Sons at the O2 is a really overwhelming end to an amazing year for us and we just can't wait to get out on the road again in the new year. Tour!”
The Bear's Den story has built slowly over the course of 2012. Beginning with the Austin to Boston Communion Tour of the US in March (watch the video here), where they shared the stage with Nathaniel Rateliff, The Staves and Ben Howard, the band then returned to the UK and traveled to a secluded cottage in the Welsh wilderness to record their eponymous debut EP.
In keeping with their DIY ethos, the band did everything themselves, right down to stamping each EP with hand-carved potato stamps. The one-of-a-kind EPs have been exclusively available at the band's live shows since it was released in September.
Tickets for the 'Agape Tour 2013' and a free download of new track 'Pompeii' are available from the band's Music Glue page.
Bear's Den 'Agape Tour 2013'
Tickets on-sale Thursday, November 29th
Wed 6 Feb: Whelan’s, Dublin
Thu 7 Feb: McHughs, Belfast
Sat 9 Feb: Shipping Forecast, Liverpool
Sun 10 Feb: Nice N Sleazy, Glasgow
Tue 12 Feb: Communion @ Ruby Lounge, Manchester
Wed 13 Feb: Red Rooms, Nottingham
Thu 14 Feb: Slaughtered Lamb, London
Fri 15 Feb: Louisiana, Bristol

Published on 29 November 2012 by Wayne Feltham