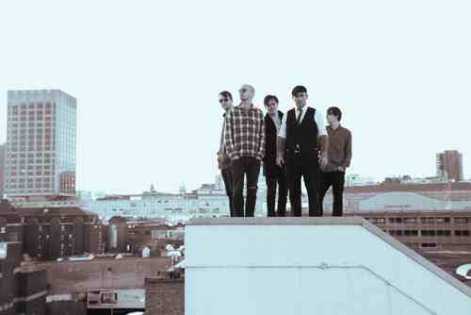 October 29th 2012 sees the release of the Twang’s third studio album, entitled "10:20". A departure for the band, "Mainline" features dark and twisted verses with a carnival like chorus.

"10:20" follows the success of their first two records (their debut clocking in excess of 200,000 sales bearing hits Either Way and Wide Awake, and second album delivering massive fan favourite Barney Rubble), which firmly cemented the band’s place in UK indie history. Lambasted by the press from day one The Twang haven’t had it easy – but the sheer love for what they do has kept them going, and with this album it really is time to let the music do the talking.

The band spent most of the last year holed up in their own studio facility in Birmingham’s Jewellery Quarter writing and recording the songs that were to become 10:20 (titled after a note that an irate studio neighbour left sellotaped to their studio door). The album introduces a  new drummer in Ash "grandmaster ash" Sheehan, a well known percussionist on the underground house scene. Known for his legendary percussion sets all over the world from the midlands to Ibiza, playing along side the likes of Annie Mac, Swedish House Maffia, P Diddy, will.i.am, and Busta Rhymes and a friend of the band, Ash originally played all the trumpets on Mainline, but when he sat behind the drum kit he blew the band away and he was in.

Singer Phil says, “We recorded the album in our own studio in Birmingham with our good friend Jon Simcox. As we built the studio ourselves, and were funding the record ourselves, we weren’t under any pressure to meet anyone else’s deadlines and had the freedom to work whenever and however we wanted without any record company hassle. We decided early on that we wanted the record to be more organic than our previous two albums so we’ve tried to be disciplined and strip away the layers and leave something natural and beautiful”.

Lyrically "10:20" is reflective and often introspective, dealing with the problems that life throws at two people trying to live together. The album features the two earlier singles Paradise and Guapa (the story of a rebel soldier falling madly in love with a girl days before he is likely to meet his death in battle) and ‘We’re A Crowd’, a call to arms addressing what people can achieve when they join together in a positive way, and written at the height of the UK’s 2011 summer riots. The record also features a cover of the Durutti Column’s lost classic, Tomorrow  - a nod to Factory Records back catalogue from fans discovering the beauty and desperation of that song for the first time.

To celebrate the album release the Twang head out on tour again in October, finishing with a headline show at London’s Scala on the 15th November.

Published on 29 October 2012 by Wayne Feltham