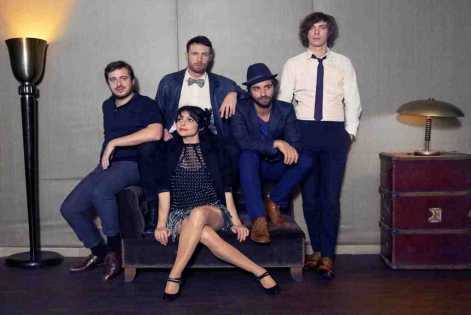 Having recently released their single ‘Clash’, Caravan Palace have been relentlessly busy this summer touring across Europe and wowing UK festival audiences at the likes of The Secret Garden Party, Larmer Tree and Boomtown Fair with their legendary live show.  They are set to hit the road in the UK from November 21st.

From the laid-back opening track ‘Queens’ with its thunderous sub bass and Django-esque guitar hook through to the raucous ‘Dramaphone’ and swung refrain of ‘Sydney’ this album is a powerful statement of intent. Throughout the LP layered strings and horns build and sit perfectly over the driving beats, whilst clever use of delays and amesmerising vocal delivery create a unique sound that is as arresting to thefeet as it to the ear. Whether your dancing the Charleston or popping the robot there is a little something for everyone.

Caravan Palace’s strength lies in their common passion for electronic music.  But Charles, Arnaud and Hughes, the founding members of the ensemble, also love swing, jazz, Django and playing those traditional instruments with flourish– guitar, double bass and violin.  It is this mash-up of the new electronic and the old traditional that ironically gives Caravan Palace such a fresh sound…this is music that swings!

The story began several years back when their first eponymously titled album sold over 150,000 copies making them the surprise breakout band in France in 2009.  In the UK the electro-swing jazz movement has been bubbling away for the past couple of years through stylish underground clubs. This dynamic music style is now on the verge of bursting out of these subterranean venues into the musical sunshine and Caravan Palace are the protagonists ofthis exciting new movement.  Appealing to dance and jazz fans in equal measure they have built up an enthusiasticallyloyal cross-section of supporters.

Files and ideas were exchanged before they regrouped in the studio to record the new single and album, using 15 vintage keyboards in the process, tirelessly trying out newcombinations before merging this mix of styles in their uniquely creative way.

So jump aboard the Caravan. Seeing the world upside down guarantees the best sound.

Published on 29 October 2012 by Wayne Feltham