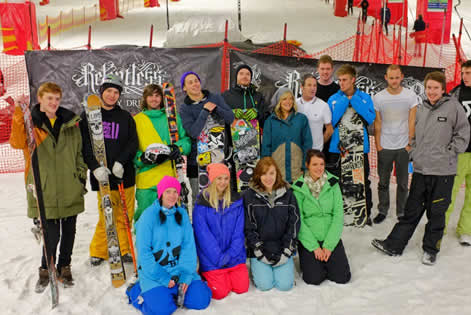 More additions to the line-up at this year’s Relentless Energy Drink Freeze Festival with the announcement of the Apres Ski Bar DJ’s and a host of athletes taking part in the ski and Snowboard World cup competitions.

Melting the ice in the Après Ski Bar will be the infamous A Skillz who will be kicking the party off on Saturday night with his  incredible deck talents which fuse funk, soul and hip-hop with D'n'B, dub-step and breaks, all sliced, mashed and cut together with a unique style of scratching and mixing.  Friday night is hosted by Hat Club, who travel the world putting on brilliant club nights so they know their music.
Other acts in the Après Ski Bar include Damien Stone, CJ Beatz, David Lee, Freerange DJ’s and many more.  With the likes of The Streets and Groove Armada tearing up the main stage this year’s lineup has to be the best yet.  Beardyman brings his beatboxing skills to the main stage on Friday and The Joy Formidable join the ever growing Rizzle Kicks on Saturday so be sure to get down with the trumpets! Check out the Full line up here
The athletes for this year’s Freeze have also been confirmed with the talented young Jamie Nicholls representing the UK in Snowboarding and James Woods bringing us all the action in the Ski comps.  With World Class recognition at stake you can be sure to see the finest tricks pulled out of the bag from all riders taking part. Last year’s Battle of Britain winner Billy Morgan will also be stepping up to prove he won’t be handing the title over easily!  Riders from all over the world will be dropping into the 32 metre high ramp which sits in front of the historic Battersea Power Station giving the crowd plenty of action.
In the warm up to the Relentless Freeze festival UKFG managed to grab a few words with Britain’s Dom Harrington practicing at the Milton Keynes Snow Dome before he headed out to Austria.  Here's what he had to say:
What do feel with the introduction of so many winter sports festivals have given to snowboarding?
“It’s great because it allows us to show off our tricks to more people and party at the end of it”
What’s your favourite trick of this year?
“Double Cork backside 1080”
Do you still get nervous at the top of the run-up ramp at Battersea?
“Yeah, it’s quite scary at the top because you can feel it wobbles, but it's an amazing scenery over the whole of London from up there”
Who on the line up at this year’s Freeze would you like to see perform?
“Beardyman is good, I’ve seen him before and I would probably like to see the Streets as well”
Find out more on the riders, schedule, and tickets at Relentless Freeze festival

Published on 29 September 2011 by Wayne Feltham