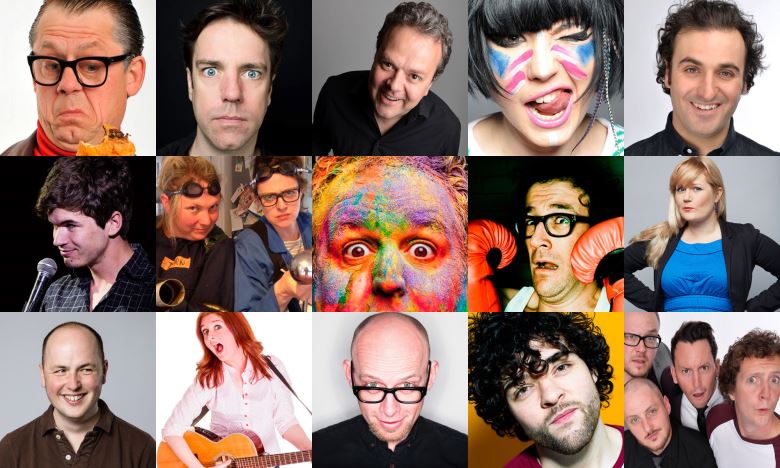 The nation’s favourite family friendly festival, Deer Shed Festival, returns for 2017 in its eighth incarnation with a comedy line-up that will make even the most hard-face, hard core festival goers fall to the floor in fits of giggles.

Honouring a guarantee from the team that has remained true since the festival’s conception – to provide their audiences year on year with a range of diverse entertainment to cater for every member of the family – Deer Shed Festival are delighted to be showcasing some of the UK comedy scene’s finest funny men and women.

The full list of comedians has been revealed, in addition to the amazing previously announced acts.

This Year’s Comedy *full list below main body of text*

Headlining the Deer Shed Festival on Saturday this year is top funny-man, and two-time Chortle Award nominee, Hal Cruttenden. Known for his witty observations of family life and what it was like to be in school with George Osborne, Hal is one of the most sought after comedians on the circuit and is no stranger to TV with appearances on Have I got News for You, Mock the Week and even an appearance in Eastenders! His most recent stand up show Straight Outta Cruttenden was his fourth tour and has taken him around the world from Edinburgh, Melbourne and now Deer Shed!

John Shuttleworth – a fictional Yorkshireman born and bred, and now Friday night #DeerShed8 headliner, played by Graham Fellows – has been one of the nation’s favourite comedy acts since he first hit the UK circuit in 1986. Armed with his old school Yamaha PSS portable keyboard, he will showcase his hilarious mastery of writing songs that focus on the issues that trouble us every-day folk, like Y Reg, a tune inspired by John’s reliance on his temperamental old banger for transport. There are rumours that John might be considering retirement in the near future – thank heavens he will appear as #DeerShed8 Friday night headliner before the hilariously catchy synth hooks are hung up for good!

Opening the ‘Comedy Night at the Big Top’ on Friday is comedian, actor, dog walker, and parent Justin Moorhouse. A familiar face on TV after appearing on Live at the Apollo, The Comedy Store, and Michael McIntyre's Comedy Roadshow, Mancunian Moorhouse will be bringing his trademark northern charm as he discusses life after 45. Justin is of course no stranger to Deer Shed, traditionally taking a fair amount of abuse from the under 8s hecklers during his set which he usually handles like an absolute wizard!

Etonians don’t get the best press at the moment. This might be a little to do with a perceived lack of humility by those in the public eye. Well, we know somebody who will certainly refute such a perception. In fact, Ivo Graham’s stand-up routines primarily feature the comedian getting on stage to publically roast himself in front of hundreds, if not thousands, of people. Ivo is the youngest ever winner of the So You Think You’re Funny award for new acts at the Edinburgh Fringe, aged 18. His comedic brand of humility is utterly hilarious.

We always used to get our celeb gossip from Josh Howie’s Movie Geek on Sky Movies, which he wrote and presented himself. After rubbing shoulders with the stars, he is now preparing to rub shoulders with Deer Shedders in summer, and we’re struggling to contain our excitement. Having four children himself, Josh is no stranger to the family friendly context. In fact, his stand-up comedy can often centre on the humour he observes in the ever so slightly darker sides of family life.

In Britain, Ireland, and her homeland Australia, Bec Hill has become a cult hero thanks to a number of award-winning solo shows and her role in top comedy duo, Bec & Tom. Her name quite often crops up in "best joke" shortlists, though it is her ability to incorporate arts, crafts and "paper-puppetry" into stand-up routines which makes her particularly memorable. Hilarious puns, quirky style and childlike enthusiasm for superheroes, action toys and arts make Bec a uniquely hilarious addition to the Deer Shed line-up.

Tom Parry will be a familiar face to Deer Shedders, with Deer Shed 8 marking his third appearance at the festival. Best known for his work with sketch show Pappys, Tom is an excellent comedian in his own right, with his most recent tour, Yellow T-Shirt, earning him a nomination for the Edinburgh Comedy Award Best Newcomer, as well as making the top ten for Dave's Joke of the Fringe. Tom will compère Saturday night with his unique brand of humour and a fantastically funny take on the world.

Stand-up, character-curios hilarity will be brought to Deer Shed by Melbourne-born, London-based comedian, Sarah Bennetto. An increasingly popular figure in the UK comedy scene, Sarah has appeared on BBC Radio 4, Sarah Bennetto's Mix-Tape, Storytellers’ Club, Global Pillage, and many great comedy podcast panel shows. Her previous material includes a “true” story of having lunch with Prince Charles at the Palace and staging her own funeral, and we can’t wait to hear what other weird and wonderful experiences she has had since.

The Scummy Mummies are two mothers and comedians – among an array of other things – who host a fortnightly podcast for “less than perfect parents” (so… pretty much all of us, right?). They discuss topics a wide range of topics relevant to modern mums and dads. We’re over the moon that the pair will bring The Scummy Mummies Show to Deer Shed 8 complete with songs, sketches, stand-up and very scummy stories.

Nick Doody’s work is wholly embedded in UK comedy folklore, having written material for legends like Joan Rivers, Lenny Henry, Dame Edna Everage and a host of Mock The Week Regulars. He was also the creator and head writer of the critically acclaimed Radio 4 show Bigipedia. After a sold out show and rave reviews at the 2006 Edinburgh Fringe Festival, Nick’s solo stand up shows have been propelled to the forefront of the British circuit.

With an incredibly endearing stage presence, Essex-boy Edd Hedges has a natural affinity with audiences. He can be seen performing his unique style of ridiculous anecdotes in various comedy clubs around the UK, including his family-friendly show, Comedy Club 4 Kids.  At only 23, Edd appears to be older and wiser than his years and has all the hallmarks of a very promising career.

Often described as "lovable" and “cuddly”, Patrick Monahan is a comedian defined by his contagious enthusiasm. His unique, and hilarious, blend of high energy and topical material has made him a hugely popular among audiences both on stage, and on radio on TV. As well a stand up performance in the Big Top, Patrick will host a Pub Quiz for Kids which was a runaway hit at 2016's Edinburgh Fringe.

Dan Nightingale’s ‘talky comedy’ makes mundane and, frankly, sometimes depressing topics seem utterly hilarious through a cheeky, buoyant energy that makes it impossible not to giggle. Widely regarded as one of the best performers working on the UK comedy circuit today, he mixes fiendishly accurate observation with a cheeky wit and killer punch lines.

Described as ‘viciously, hilariously blunt’ by Chortle, the charming Brummie, Hannah Silvester, blends a blunt and honest observational style of wit with a warm and likable stage presence. Not just in demand on the comedy circuit, Hannah is also an accomplished children’s entertainer. We’ve heard through the grapevine that Hannah could be bringing her acoustic guitar to serenade Deer Shedders!

In addition, Deer Shed 8 will also feature many comedians in its theatre & shows line-up:

The Noise Next Door bring musical comedy with a difference to #DeerShed8! Outlandish characters, perfectly-timed punchlines, catchy tunes and hilarious lyrics make for one of the best music-based comedy acts in the country. They will present The Really, Really Good Afternoon Show, which is suitable for all ages!

Toby Hadoke is the archetypal Whovian. Connecting the best of both his critically acclaimed shows along with never before seen material, and encompassing his continued love affair with the Doctor, he presents For the Love of Doctor Who, a highly intelligent and thoughtful comedic show.

Jarred Christmas is one of New Zealand’s finest exports to the UK. Hobbit (aka Jack Hobbs), is the UK’s finest beatboxer. When the two combined their art forms and performing prowess into one show, The Great Comedy Beat Box Party was born!

Why not witness how a group of young people could stand up as world leaders? They’re bound to be better than our current crop! A bit too Lord of the Flies for your liking? Worry not – Keith Farnan will be on hand to guide them by presenting Kidocracy as Brehon, his alter ego.