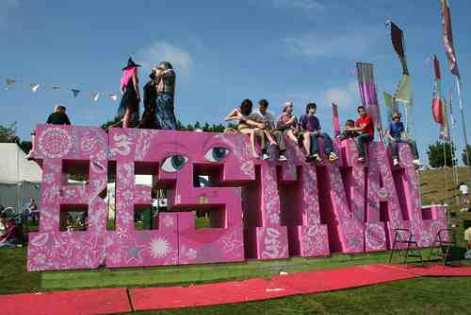 tickets are flying out the door for the 2012 Wildlife spectacular -if you haven't grabbed yours yet, dust of your giant bear jumpsuit and don't delay, the best party of the summer is on the horizon, don't miss out!

Bestival HQ is abuzz with excitement as the definitive festival of the year, set in the leafy surrounds of Robin Hill Country Park on the Isle of Wight, draws tantalisingly close.

With an already bountiful line-up that includes headline sets from Stevie Wonder, Florence + The Machine and New Order, exclusive performances from The xx and Sigur Rós and a cavalcade of mouth-watering sets from the likes of Friendly Fires, Soulwax, Annie Mac Presents, Skream & Benga and many, many more, we have got a wealth of ace new live acts and DJs to announce, with full line-ups for Rodigan’s Ram Jam and Jaguar Skills and his Amazing Friends and even a rare appearance from one of the world’s most controversial thinkers!

We’re very excited indeed to announce that recent UK singles chart toppers Rudimental will be making their Bestival debut this September. Hailing from London’s east end, the four-piece are going to be smashing out the certified drum and bass bangers for the mainstage crowd, including ‘Feel The Love’ which has propelled them into the heart of the big league. Prepare to bounce when the beats drops.

Fresh from her recent trip to Los Angeles, where she’s been writing and recording songs for her forthcoming third album, Kate Nash who has caused a stir with her latest offering, ‘Underestimate The Girl’, a no-holds-barred dive into punk spirit will also be making her way across the Solent to join us once again.

dan le sac, whose much anticipated debut solo album ‘Space Between The Words’ is set to be released imminently, will be making a very welcome Bestival solo appearance to showcase his musical psyche, embracing everything from electro-pop to psychedelia, all accompanied by an impressive array of vocal talent. Also revelling in his solo ambitions dan le sac’s regular sparring partner Scroobius Pip will offer up a slice of his acclaimed ‘Distraction Pieces’ long-player that has seen him smash his punk, rock and hip-hop influences into a pleasing new whole.

Plus there will be sleek modern action with soulful vocals and garage stylings from criminally young sibling duo Disclosure. Supporting the release of their eponymous debut album that’s due to drop the week they play Bestival, Stooshe will be cranking up the in your face R&B factor. Clement Marfo & The Frontline will add gargantuan pop hooks, sweet neo-soul vocals and a rush of energised rock dynamics to their grime and hip-hop core. And Jeremy Warmsley and Elizabeth Sankey AKA Summer Camp are set to demonstrate their 80s inspired synthpop sunshine, delivering what can only be described as bliss drenched moments of pure pop joy.

A perennial Bestival favourite, The Correspondents will be mixing up the heady flavours of dance music, all sensationally seasoned with frenetic frontman Mr Bruce’s unique vocals. But wait! If you can’t hold on until September to experience The Correspondents, then you’re in for a treat as we have a brilliant free track from them for your delectation that you can download here.

An undisputed legend of reggae, we’re over the moon that on Friday evening Bollywood will play host to David Rodigan MBE Presents Ram Jam. With sets from the master himself and Shy FX & Stamina MC, Top Cat feat Sir Coxsone Outernational, B Traits, The Nextmen & MC Wrec, General Levy and Congo Natty in what is destined to be a heavyweight session featuring the best of classic and brand new music spanning the worlds of reggae, dub, D&B and dubstep.

David is also very pleased to announce the addition of his Ram Jam Chicken Shack at this year’s festival, located near the Bollywood tent, selling the very best in Caribbean food with a twist!

Says David Rodigan MBE - “Delighted to be returning to Bestival, but this year with my own Ram Jam tent and special guests. Plus we’re bringing our Ram Jam Chicken Shack, so its music for your mind and food for your soul, Rodigan style and fashion! Time to bring the signal!”

We’re ecstatic to be able to unveil the full line-up for Jaguar Skills & His Amazing Friends , as he takes over Bollywood on Sunday night with glitchy electro dubstep from Zomboy, part rap, part punk, part rave-up rawness from Murkage, who will be playing live, bass heavy brilliance from three times DMC champion DJ Cable and electro and house bangers aplenty from DJ@War.

Says Jaguar Skills - “Ninja’s…everybody knows I love playing Bestival…and this year is set to become my favourite year ever. Rob da Bank and his team have kindly given me full control of the line-up on the Sunday for the Bollywood tent. So join me, Murkage (Live), Zomboy, DJ Cable and DJ@War’ as we bring an aural assault of every tempo to your eardrums. HoooOOOO!”

And, charged with keeping the dancelfoors bouncing day and night at Robin Hill, we have even more superfly selectors coming to the party including the expansive breaks, dub and glitch sounds of San Francisco’s Bassnectar, grime, house and soul styles from Alexander Nut, reggae greats played correctly by the incomparable DJ Derek, sing-along sickness from the Hip Hop Karaoke crew, hip shaking house from The Good Guys, fist pumping goodness from Soft Rocks who will be taking things beyond the guiltiest of pleasures and atmospheric techno from Ben Hoo. Plus there will be Continental Drifts’ main man Chris Tofu, UK Bass action courtesy of Low Fro, legendarily eclecticism from Michael Cook, non-stop party flavours from Bestival heroes Sombrero Sound System and crazy funsters Dick and Dom will be dropping their ‘Rip It Up’ DJ set. No, really! We also advise you to keep an eye out for the Police Rave Unit dropping classic cuts across a spectrum of dance music, whilst keeping it legal on the mic!

Finally, we’re very pleased indeed to be able to announce that controversial author and public speaker, David Icke will be conducting one of his world-famous talks in the Ambient Forest. Notorious for his contentious views and conspiracy theories, his vast array of hypothesis and philosophies aren’t always as outlandish as you might think and we heartily recommend keeping an open mind and checking out what he’s got to say.