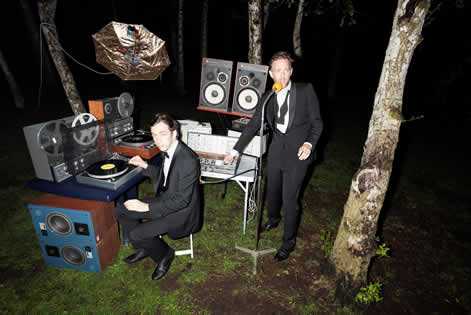 Belgian brothers 2manydjs will return for their hugely popular annual show at their favourite Scottish club on Friday 16th March 2012.

2manydjs (Stephen and David Dewaele) performed their first ever Scottish set here at the Arches back in 2003 at Death Disco, just after the release of As Heard on Radio Soulwax Pt. 2 –  when not many people knew who they were. Nine years later, their annual show at the Arches is now something of an institution – consistently selling out, and without doubt one of our favourite nights of the year.

Otherwise known as electro-rock band and hugely in demand DJs, remixers and producing legends Soulwax – famous for hits such as E Talking, Any Minute Now and NY Excuse – the mash-up duo are still on top of their game in terms of playing and curating the best electro music being made today, using their agile cut-and-paste mixing style to get the crowd riled up by chopping in some classic party starters and epic dance hits. They’ve toured around the world and played as both band and DJs at the top festivals as well as producing huge acts: everyone from Digitalism, Justice, LCD Soundsystem, Tiga and Crookers, Peaches and the Rolling Stones.

Last year marked the fifth of their audio-visual spectacular showcases, bringing a line-up of electro’s A-list including Erol Alkan, Brodinski, Fake Blood and Gesaffelstein to London, Paris and Belgium for Soulwaxmas – a Christmas party like no other. In 2011, they launched pioneering online station and app Radio Soulwax,  which enabled fans to stream 24 themed albums from the brothers for free, each containing a one hour mix of exclusive and uniquely created audio & visual content.