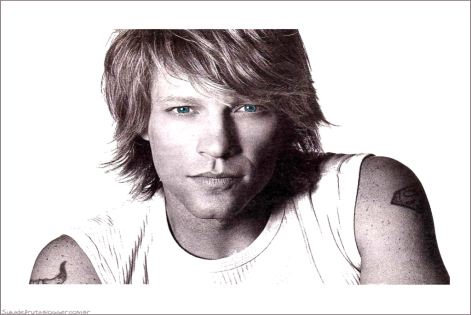 Following yesterday’s announcement of Friday headliners The Stone Roses the Isle of Wight Festival just got hotter with the addition of Grammy Award winning Bon Jovi to its 2013 line up.

Closing the Main Stage with a UK festival exclusive on Sunday 16th June the rock superstars will top off another ultimate weekend of world-class music. Tickets for what will be an unbelievable experience go on sale on Wednesday 28th November from www.isleofwightfestival.com.
For almost three decades, Bon Jovi have earned their reputation on the road as the essential live rock band - having performing for more than 35 million fans at more than 2,700 concerts is over 50 countries.  Along the way, the New Jersey-based band - lead singer Jon Bon Jovi, guitarist Richie Sambora, keyboardist David Bryan and drummer Tico Torres - have sold 130 million albums and have released a raft of awe-inspiring hit singles. Now they bring their anthemic live show to the Isle of Wight Festival, so make sure you don’t miss out on this unforgettable and historic performance. Now Bon Jovi join Friday’s Main Stage headliners The Stone Roses, as the Isle of Wight Festival 2013 shapes up to be another astounding year.
Jon Bon Jovi, says: “The Isle of Wight Festival is legendary and we're excited to join in the long tradition of Rock 'n' Roll history.  We are honoured to be the headliners on the Main Stage Sunday night. This will mark our first visit to the island and I expect it will prove to be a highlight of our tour and of 2013.”
John Giddings, the Festival’s promoter, says: “I can’t imagine a better rock band with more hits to close our Sunday night. The Rolling Stones, Paul McCartney and Bruce Springsteen are hard acts to follow – but I think they’ll do it!”
The Isle of Wight Festival is renowned year on year for its eclectic & electric line-up, mixing iconic artists with up and coming acts over 3 stages bursting with talent. Free-spirited festivalgoers come together in a simply beautiful setting for one of the most distinctive and best-loved events of the season.
2012 saw a trilogy of American legends accompanied by the best of British wow the crowds including Bruce Springsteen & The E Street Band, Pearl Jam, Tom Petty & The Heartbreakers, Noel Gallagher’s High Flying Birds, Tinie Tempah and Jessie J. Conjuring up a truly original atmosphere, the Isle of Wight Festival is the perfect stomping ground for bands and fans alike. Tickets for this epic line up will go quickly, so head to www.isleofwightfestival.com on Wednesday 28th November to get yours.
The Isle of Wight Festival takes place 13th – 16th June @
Seaclose Park, Newport, Isle of Wight
Keep up to date with all the Festival action at www.isleofwightfestival.com
Facebook.com/iwfestival
Twitter @IsleofWightFest
Ticket Prices
Weekend ticket with camping: £185 / Kids £92.50
Weekend ticket non camping: £170 / Kids £85
Day tickets (Friday/Saturday/Sunday): £75 / Kids £37.50
Campervans (camping ticket required in addition): £100
Weekend advance parking: £15
Day advance parking: £10
All tickets are subject to a booking fee.
Infants free of charge but must be booked in advance (6 yrs and under)
All disabled customers must book via Ticketmaster on (0)844 847 1655
Child/Infant tickets CLARIFICATION:
Children 6 years and under are FREE OF CHARGE* (but must be issued a free infant ticket). A child who is 6 years of age on 13/6/13 can attend the Festival free of charge. However, a child who is 7 years of age on 13/6/13 must purchase a half price CHILD ticket.
Children 12 years and under are half-price:  A child who is 12 years of age on 13/6/13 can buy a half price child ticket.  However, a child who is 13 years of age on 22/6/12 must purchase a full price ADULT ticket.

Published on 27 November 2012 by Ben Robinson