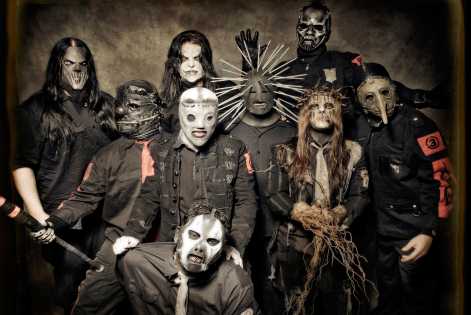 SLIPKNOT are today announced as the third headliner at Download Festival on Friday 14 June 2013, marking the band’s second headline appearance following an explosive set in 2009. They join fellow headliners Iron Maiden on Saturday 15 June and Rammstein on Sunday 16 June.

Slipknot’s Clown said, ‘"We are extremely honored to have been asked once again to headline the Download Festival. This most definitely will be an experience not to be missed. Every time we've played Download we have created memories. Its always good to have the church of the Knot, the alter of the Knot, giving the sermon of the Knot to the congregation of the Knot, the culture of the Knot. This summer cannot come soon enough. Partake in the imagination or don’t bitch.”

Slipknot are a cultural force to whom rock fans need no introduction.  A band from Des Moines, Iowa, U.S.A, Slipknot have evolved into something not unlike the alchemists, spiritualists and magicians of yore - the men in Slipknot tap into something primal, instinctual and combustible with each performance, and every album.  The band has notched 11 Platinum albums and 38 Gold albums around the world, but these mainstream mile-markers aside, the engine of Slipknot is the power they derive from their live performance, the fertile ground of their fans and their shared, collective subculture.  Slipknot is devoid of compromise.  They offer no quarter. Take it or leave it.

Slipknot thrives in combustible circumstances, where impassioned performances filled with blood, sweat and fire are raw displays of esoteric wonder with a clear-cut, savagely creative command of expression. Multiple percussive instruments, electronic landscapes and near-apocalypticproportions of stage production bring forth songs like “Psychosocial,” "Duality", “Wait and Bleed,” “Spit it Out,” “Before I Forget”, "Snuff", “Sulfur,” and “People = S**t”.  All modern classics, and anthems for a disenfranchised generation, full of depth, meaning and hidden blueprints for positivity within a framework built from anger, depression, rage, sadness and darkness. Slipknot embodies the full scope of the human experience, spit out and handed over to the crowd.  Always imitated, never duplicated.

Andy Copping, VP of Promotions at Live Nation commented: “Slipknot’s last appearance at Download has gone down in the festival’s history as one of the best ever headline sets. God knows what they’ll have in store for 2013 but I’m looking forward to seeing how they’ll top the last one.”

Weekend tickets with camping go on sale 9am Friday 28 September from www.downloadfestival.co.uk.
Download 2013 takes place at Donington Park from 14-16 June.

Download celebrated its 10th anniversary this year with a sell out event headlined by The Prodigy, Metallica and Black Sabbath.

Published on 27 September 2012 by Wayne Feltham