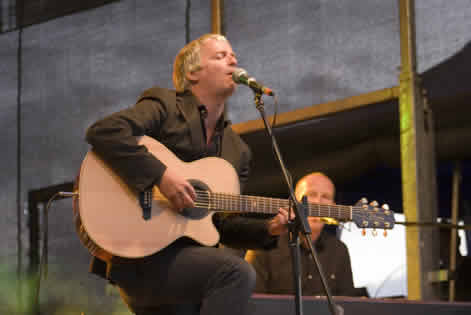 In only its second year, the sun shone for the Deer Shed Festival 2011 (DSF). Billed as a family friendly music festival, DSF took place at Baldersby Park in Topcliffe, North Yorkshire - five minutes off the A1. With a whole host of activities for ch

Last year the festival was only on for one day, this year the event was extended to allow time for people to arrive Friday and leave Sunday. In view of the arrival/departure of the audience the music timetable for Friday and Sunday was light. The majority of the music was during Saturday, kicking off with Tom Williams and The Boat at 11.20am building up to headliners I Am Kloot. By the time the headline act took to the stage all other music at the festival had ended so everybody came to watch this band (who are due to play at the V festivals later this year). Their performance was certainly one not to be missed and well deserving of the headline spot.
With some consideration to the young children at the festival, the bands on the main stages finished by 11pm. However, not everyone was ready for bed, so the Glendale Family provided an acoustic session in the lounge bar until 1am, somewhere for the adults to chill out with a quiet beer before bed.
As well as the bands, there was a whole host of other acts to entertain the entire family. The cabaret on Friday night reached its climax with a breathtaking acrobatic display which took place suspended at the top of the Big Top tent and had the whole audience, young and old, gasping in amazement. On Sunday the audience were equally wowed by the impressive, and interactive falconry display, during which members of the audience were selected to enter the arena and handle the birds.
All in all, the Deer Shed Festival was a brilliant chilled out weekend for everyone there, even the sun came out for the duration. Perfect!