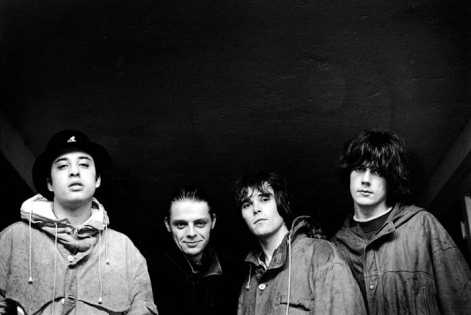 V Festival 2012, sponsored by Virgin Media, is back for its seventeenth year and is set to be another cracking line up. Legendary Mancunian rockers The Stone Roses and V Festival favourites The Killers are today announced as headlining V Festival’s V

Taking place across the V weekend of 18th and 19th August 2012, the original Madchester foursome and the returning US rockers will be joined by a host of superstars to make this year’s V Festival, one to remember.
Following last year’s ‘American Revolution’ with performances from Eminem and Rihanna, feisty US rapper Nicki Minaj will be gracing the fields of Hylands & Weston Park, and after his show stopping set in 2011 David Guetta will be joining her.
An exciting line up of acts old and new have been brought together to entertain music aficionados and festival debutantes alike. Lucky fans with tickets to this summer’s hottest festival will also see performances from the likes of Snow Patrol, Noel Gallagher’s High Flying Birds, Tinie Tempah, two-time Brit Award winner Ed Sheeran, Example, Tom Jones, Keane, Madness, James Morrison, Nero, Emeli Sandé, Friendly Fires, Happy Mondays, Professor Green, Olly Murs, plus many more to be announced across four stages at the two festival sites in Hylands Park, Chelmsford and Weston Park, Staffordshire.
Returning Essex boy Olly Murs said: "Coming back to play at V Festival for a second year is fantastic! I've been going to the festival as a punter for years, so performing there is always going to be special - especially on that main stage. I'm bringing my full 10 piece band with me this year, it's going to be immense - I can't wait"
The hugely successful Glee Club Comedy Tent also makes its return as the festival’s fifth stage this year, with side-splitting performers including Doc Brown, Justin Moorehouse, Kevin McCarthy, Natan Caton, Gary Delany, John Fothergill and many more to be announced in the lead up to the festival.
Festival Director, Simon Moran comments: “We’re really delighted with the line-up this year. We have a great mix of artists topping a bill that will see the welcome return to live performance of Manchester’s finest export, along with some of the biggest acts in the music industry today including The Killers,Tinie Tempah, Ed Sheeran and the legendary Noel Gallagher and his High Flying Birds.
“The mix of established and exciting breakthrough acts promises to give festival goers a cracking weekend.“
Over the festival weekend there’ll also be sets from Noah & The Whale, Ben Howard, Rizzle Kicks, Frank Turner, Labrinth, Maverick Sabre, The Enemy, Miles Kane, Dappy, Rodrigo Y Gabriela, Pixie Lott, Lissie, Shed Seven, The Ting Tings, The Human League, The Proclaimers, The Stranglers, Reverend and the Makers, Inspiral Carpets, The Rifles, Dj Fresh.
Tinie Tempah’s pal Labrinth said "So happy that I'm going to play V festival!  Can't wait to get out there and rock the crowd. V Fest is special! See you there!!!!"
The glamorous V Style camping will also see a return this year. V Style got agreat reception last summer and will once again give festival fans the chance to get the best of both worlds – being able to dance the days away with their favourite artists before chilling-out, in luxury, in ready built Pod Pads, Cloud Yurts, Hearthworks Tipis and pop-up hotel rooms.
Festival Director, Bob Angus comments: “As in previous years, we want to again emphasise how important it is for fans to buy their tickets from official outlets listed on VFestival.com. This will ensure they don’t miss out on what promises to be the hottest ticket this summer.”

Published on 27 February 2012 by Ben Robinson