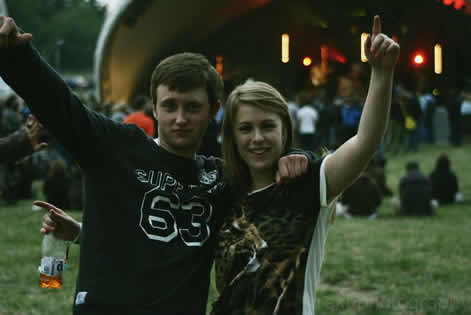 The highlights of the weekend at Truck festival consisted of the likes of Graham Coxon, guitarist of Blur who took to the stage on Friday night, filling up the ‘Clash’ tent with the huge crowd that came to see him perform.

Graham was among many artists to perform in this tent that had an unbelievable reaction from the crowd. Edwyn Collins was another who packed out the tent, creating a wild atmosphere whilst he played his set. His last track was ‘A Girl Like You’ which sent the crowd into fits of dance as they all sang along to his well-known song.  Marques Toliver, an upcoming artist from Brooklyn, played to the crowd beautifully Friday evening, showing off his extremely unique musical ability as a violinist.

Across the weekend the audiences who engulfed the Main stage arena, witnessed some sensational artists. Deer Park was the first band to hit the Main Stage getting the festival off to a great start, which would be followed by many more incredible artists. One of those being a five-piece synthpop band from Steventon itself called Alphabet Backwards, they took to the stage and performed a vibrant and lively set which was thoroughly enjoyed by all that were watching. It was difficult to see anything other than a mass of heads all bobbing to the beats from the Fixers who were followed by The Young Knives on Saturday night. Both bands had the stage surrounded in a sea of dancing bodies as they each performed to a high standard. With their upbeat and happy tunes the crowd loved them, you could just tell by looking around that everyone was having fun and indulging in the festival.

The ‘Special Guest’ that played in the Boxford Dance Village was revealed to be DJ Fresh when at the time of his performance he came out onto the stage to see the truckers of Truck Festival 14 through to Sunday morning.

Read more from this review here