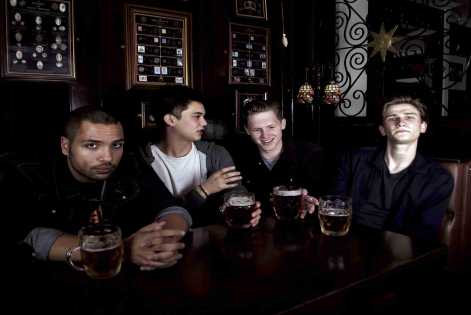 Since supporting Brandon Flowers during last year’s Eden Sessions, the Launceston lads have gained support from Radio One DJs Zane Lowe and Mike Davies as well as 6Music, XFM, the NME and Kerrang

The band’s mixture of punk, rock ‘n’ roll and traditional Cornish folk has also seen them play alongside the Pogues and record a new version of the Cornish song Little Eyes with Ben Lovett of Mumford and Sons. Recently, Crowns have been touring the UK supporting punk band Sharks while putting the finishing touches to their debut album.

There will be plenty of musical treasures throughout the day, with Devon band The Computers headlining the Stage Right Stage. Their debut album was produced by Rocket From the Crypt’s singer Speedo and has received critical acclaim.

Since the release of their Radio One play-listed single, The Computers have toured non-stop with the likes of Pulled Apart by Horses and Dropkick Murphys.

The Computers will be joined by Cornish pop-punk heroes Bangers, surf-punk pioneers The Black Tambourines and the riotous sounds of The Jellycats.

Martin Williams, Eden’s Marketing Director, said: “We are proud to have played a part in launching Crowns into the mainstream, so it feels great to welcome them back to support such heroes of modern punk.”

The Blink-182 Session has sold out, but tickets are still available for musical comedian Tim Minchin (June 23), dance performer Example and grime artist Devlin (June 30), Frank Turner and the Sleeping Souls headlining a day of folk music (June 1), drum and bass legends Chase & Status and hip-hop singer and producer Labrinth (July 4), UK soul and hip-hop star Plan B (July 6) and indie stars Noah and the Whale and The Vaccines (July 11).