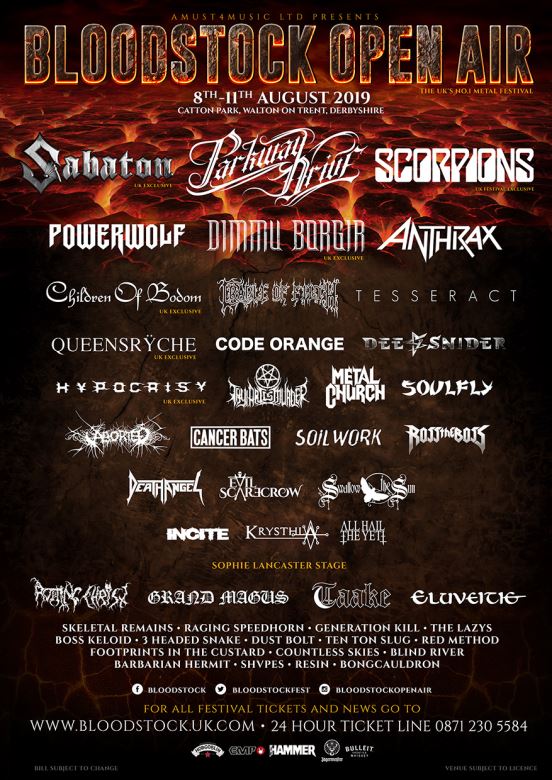 Bought your BLOODSTOCK 2019 ticket yet? We’re more than half way there now; just 19 weekends remain ‘til you can be back with your metal brethren on the hallowed ground of Catton Park.

Brit tech/prog extremists, KRYSTHLA will kick off proceedings on the Ronnie James Dio main stage on Saturday.  The band are currently in the studio working on their third studio album, set for release this Summer, so expect new material in August!  In the meantime, check out the video to ‘The Minor Mystery Of Death' taken from their last release, ‘Peace In Our Time’ -

Six more bands pick up spots on the Sophie Lancaster stage, bringing their glorious noise for your delectation on both Thursday and Friday.  Kicking off the fun after you’ve set up camp on Thursday are doom-laden riffmongers, BARBARIAN HERMIT, classic hard rockers BLIND RIVER, groove heavy slug-lords TEN TON SLUG and bringing the party and all the laughs for opening night, FOOTPRINTS IN THE CUSTARD .  On Friday on the Sophie stage, we also welcome melodic death metal beasts COUNTLESS SKIES and sludge metal squad BONGCAULDRON.

BLOODSTOCK Director, Vicky Hungerford and husband Alan’s clothing company Heavy Metal Lifting Club are proud to be the official sponsors of BLOODSTOCK’s Strongest Man competition for 2019 which is held in the main arena for its 3rd consecutive year in 2019.  The contest showcases some of the strongest men and women over 3 days at BLOODSTOCK and you too can enter if you think you’re strong enough!  Ant Brown from 100% CA, who runs the competition for BLOODSTOCK, has organised 4 national qualifiers that you can get involved in, tagged ‘Muscle 2 The Masses, The Road to BLOODSTOCK’s Strongest Man’.  Heats will be held in four regions; Wales (tbc - 19th May), South (High Wycombe - 16th June), North (Newcastle - 29th & 30th June) and Midlands (Tamworth - 6th July) and the Top 5 competitors from each qualifier will compete in BLOODSTOCK’s festival arena on either Friday or Sunday.  If you think you’re strong enough, come join the lifting fun.  We need supporters too, so if you prefer less strenuous pastimes, come along to watch the competitors battle it out for a place at BLOODSTOCK!

Whilst the boys lift heavy on Friday and Sunday, the ladies do the same on Saturday!  We’re also welcoming the best female athletes from across the land for Britain’s Strongest Woman 2019.  The line-up will include two of the best in the World and the current World, Europe, Britain and England’s Strongest Women’s Champion, Andrea Thompson (Opens) and Rhianon Lovelace (U63kg), as well as Top 10 World’s finalist and current British U82kg Champion, Rebecca Cumpsty.  It’s shaping up to be one of the best women’s contests ever!

Our first phase of BLOODSTOCK club nights start on Saturday 6th April!  More will be added for June/July, so don’t despair if your local rock club isn’t listed yet.  Get along to one of the following events, check out some tunes from BLOODSTOCK bands old and new, and be in with the chance of winning weekend tickets or related giveaways.  Expect fun ways to win - previous events have seen the likes of bucking broncos, endurance tests, and air guitaring!  Check your local club for details, as dates may be subject to change.