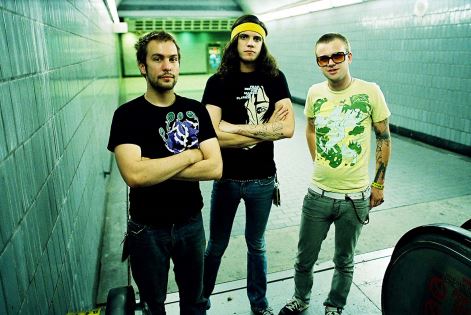 ArcTanGent has added The Fall of Troy, Joan of Arc, Maybeshewill, Vessels and Lone Wolf to the 2015 line up

Organiser Simon Maltas said “people are going to go really mental for this announcement. Not only have we persuaded The Fall of Troy to come back to our shores for the first time in years, but they’ll be flying over from the states with the fantastic Joan of Arc in tow as well! To have one, or maybe even both, of the Kinsella brothers on site will be a massive treat for the ATG crowd. And not to be outdone by the Yanks we’ve also got the cream of what the UK has to offer with Maybeshewill, Vessels and Lone Wolf. Roll on August!”

Retuning to ArcTanGent for the third year running, John Helps of Maybeshewill says, "With a slight feeling of relentless inevitability we're absolutely delighted to be back at one of our favourite festivals in the UK this year. Having played both its first year and its sophomore event, and having stayed for the entirety of both festivals, we're confident it will be one of the highlights of the summer for us both as a band and as music fans."

Simon continued “judging from our ticket sales so far, ArcTanGent 2015 is looking like it is going to be the best year yet. Our three day tickets including Thursday entry are close to selling out so anyone who wants to see the likes of 65daysofstatic, Mylets and Brontide should get their tickets ASAP.”