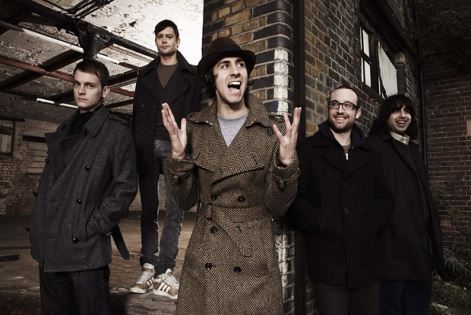 Maximo Park and Frank Turner & The Sleeping Souls are now confirmed as headliners for Standon Calling 2014, taking place 1-3rd August in Hertfordshire. A self-styled overgrown house party with a hedonistic mix of indie, electronic and pop sounds pumping from the speakers, this summer is sure to see a vintage year of Standon Calling following on from 2013’s sell-out success. Furthermore, with adult weekend tickets available from standon-calling.com at only £119 for a limited time this is the best value-for-money festival this season.

Newcastle’s indie rock five-piece Maximo Park have recently scored themselves a third Top 10 album with ‘Too Much Information’. Whilst summer may seem pretty far away their headline set at Standon Calling will be a chance to celebrate the band’s continuing success.

In an opening-night headline set, Frank Turner and his band, The Sleeping Souls’ appearance at Standon Calling will be intimate compared to his recent 20,000 capacity sell out shows at London’s o2 Arena. Turner’s often politically charged songs are renowned for bringing together rousing crowds in mass sing-a-longs perfect for festivals.

The festivals third headliner will be announced in the coming weeks.

Elsewhere on the line-up Clean Bandit, riding high on their recent number one single ‘Rather Be’, will bring their electronic sounds to Standon Calling. Local girl Charli XCX is in for a home turf gig when the Hertfordshire-born singer appears at the festival. A feature on many 2014 ‘ones to watch lists’, Ella Eyre makes for another feisty, femme-pop addition to Standon Calling’s musical offering.

The more indie-centric side of the festival features blues-tinged sounds from The Heavy, the British neo-soul group have made a splash on both sides of the Atlantic and call legendary independent label Ninja Tune home. Also confirmed are Birmingham scene stars Peace, a return to the festival for TOY and a set from folk-tinged outfit Leisure Society. So far the best on-theme act for 2014, The Cuban Brothers will be on hand, channeling the musical spirit of Havana. Bristolian synth-pop five-piece The Other Tribe join the line-up complete with a Pete Tong seal of approval and also to take to the stage will be indie singer-songwriter Saint Raymond.

Standon Calling’s theme for 2014 is ‘Lost in Latin America’. Revolutionaries, Aztec ruins, Amazonian rainforests and more will be woven into the look and feel of the festival culminating including a Saturday carnival, as ever, with prizes being award to the best costumes.

Super-early bird tickets have recently sold out but a ‘tier 1’ price of £119 for an adult weekend pass is now available for a limited time. As many other events reach, or indeed charge excess of £200 for tickets, Standon Calling offers quality and value for money.

Further announcements including additions to the line-up, DJ programme, fringe entertainment, swimming pool area, dog show and more will be made over the coming months.