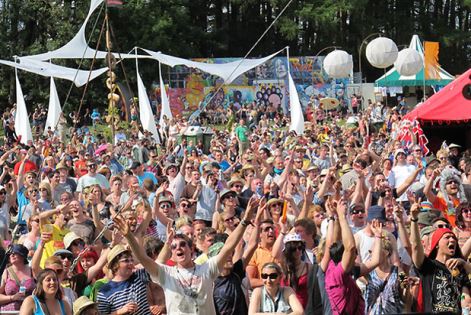 Never a hostage to fashion Beat-Herder’s mission has always been to throw the best party possible, single-mindedly pursuing an eclectic artist bill designed to deliver a good time for all.

Everyone has heard the stories about the dawn of the festival age – how a bunch of hippies turned up in a field in the 70s with a Comma van and The Crazy World of Arthur Brown, how anything went, how it was for music loving kindred spirits whose only intention was to have a good time. No advertising banners, pop-up sampling, promo staff. Everyone has heard those stories and everyone wishes they could have been there. At the start of something. A more innocent, joyous, genuine festival experience.
Explained Nick Chambers: “Without using an obvious cliché Beat-Herder just grew organically. We started out in the 90s organizing free parties – basically because there was nowhere for us to go and have a good time with good music – and it grew from there. We found an amazing spot and met a like-minded farmer and there you have it. Nine years later and we’re still organising the best party you’ve ever been too. That’s at the core of everything we do. The party.”
Said Nick: “Beat-Herder HQ is an old factory in Keighley  - it’s where the magic happens! All year round we work on stuff, a bit like Santa’s workshop but more psychedelic. Over the years we’ve built a street in the woods with a fully working tattoo parlour, barbershop, Hotel California venue and a musical garage forecourt. We’ve even built the Church of Beat-Herder that holds three services a day during the festival. It’s pretty out there. Last year we launched The Fortress – a full-size oriental style castle. It went down a treat! As did the new music tent, the French themed ‘Maison D’etre’.  We’ve got some more new builds happening this year - all will be revealed!”
Never a hostage to fashion Beat-Herder’s mission has always been to throw the best party possible, single-mindedly pursuing an eclectic artist bill designed to deliver a good time for all. Previous line-ups have veered from the sublime to the ridiculous by way of the genius with no genre left untouched providing the acts adhere to the party line.
“Stand out performances…well there’s been loads to be honest!” Said Nick. “Our residents over the years have been amazing, they really reflect the Beat-Herder vibe and are great people too - Mr. Scruff, The Dub Pistols, Utah Saints and Krysko.”
The Woods have always been important to us, it’s where things started, and every year we have had our heroes up there. In the early days we had Andrew Weatherall and Justin Robertson, Evil Nine and Layo and Bushwacka progressing to Fake Blood, Etienne de Crecy, Erol Alkan and Riva Starr.”
Last year was probably our best ever with the new field and stages not to mention having the weather on side! The sun shining down on Chic featuring Nile Rodgers, Booka Shade and Groove Armada all on the opening night was perfect. Sunday in the Woods was great too with Mr. Scruff, Norman Jay MBE, Bondax and MistaJam.”
All said though the stand out show for pure party has to go to Black Lace who played in our very own Working Man’s Club after Orbital closed the main stage at midnight – it was absolutely crazy!”
Over the year’s Beat-Herder has played host to some of the best-loved acts on the planet from global names to emerging talent, from Groove Armada to Lee ‘Scratch’ Perry to Leftfield to Jake Bugg and all points between. This year festival goers can expect 15 stages including the Main Stage, The Fortress, The Woods, Trailer Trash Big Top, The Snug, The Working Men’s Club and many more beside.
2014’s line-up will be announced later this month and rest assured it will be suitably bonkers but also brilliant. And most important of all, it’ll be the best party of the summer.