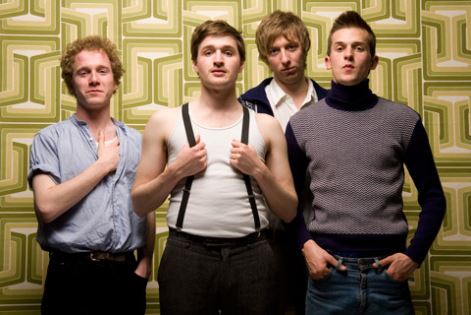 the organisers of The Great Escape, May 8th-10th 2014, announce a further 150 artists set to perform at this year's event.

Now in its 9th year and firmly established as Europe’s leading festival for new music, some 18,000 attendees will once again bear witness to atmospheric sets in the 35+ venues across Brighton, knowing that The Great Escape is the best opportunity to catch upcoming artists in inimitably intimate spaces.

Aiming to truly represent the full spectrum of emerging talent in contemporary music, BBC Sound of 2014 nominated GEORGE EZRA will perform; Elsewhere, JIMI GOODWIN, frontman of Doves, who has been musically mutating for over 15 years, will take to one of the festival’s stages. Behind-the-scenes songwriter/producer MNEK, whose debut single is due this spring, electronica craftsman EAST INDIA YOUTH and Canada’s KIESZA, currently tearing up the electro-pop dance scene, also join the line-up today.

Critically acclaimed four piece WILD BEASTS*, who yesterday released their highly anticipated fourth studio album ‘Present Tense’, with support from the uncompromising THESE NEW PURITANS* and enigmatic alt-pop ensemble ADULT JAZZ* are confirmed to play Friday night’s Brighton Dome show. The Great Escape are also delighted to announce WAR CHILD, the organisation that protects children living in the world's most dangerous warzones, as lead charity partner for 2014. Together, TGE and War Child will host this musical triptych with £1.00 of every ticket to this show sold donated to War Child.

Jim Benner, Deputy Director of Music & Entertainment, of War Child said: “War Child believe in the power of music which helps us engage people in the vital work that we do, and has raised the money to help children whose lives have been torn apart by war. That belief in the unique power of music is why we are proud to be associated with The Great Escape Festival – a brilliant showcase for the best emerging musical talent from around the world.”

Kat Morris, Festival Director, added, “We’re truly thrilled The Great Escape and War Child will be working together at this year’s event. The incredible, worldwide outreach work that War Child does is indispensable and hopefully, with The Great Escape’s support, we can help to amplify their message.’

In its nine year history, The Great Escape has gained widespread recognition as an international platform for new talent. The festival is proud to be working with Music Finland as its lead international partner for 2014 and today sees the final instalment of Finnish artists announced. It has already been announced that the future sounds of Finland will be exported to the British Seaside in the form of JAAKKO EINO KALEVI, SIN COS TAN and SATELLITE STORIES. Joining these artists today are full throttle rockers THE SCENES, the softly melodic MIREL WAGNER, up-tempo indie pop The New Tigers, family rock trio VON HERTZEN BROTHERS, cinematic electronic pop from SUVI and shoegaze daydreamers NEØV.

The Great Escape is proud to work with a number of partners with whom they share a mutual passion for music and this year welcomes XFM as a media partner. XFM will host a 3-night stage

Mike Walsh, XFM Deputy Programme Director & Head of Music, said: 'As one of the world's most respected music festivals and conferences, we are thrilled to have Xfm renew its partnership with The Great Escape. With our own Xfm stage, and on air coverage, we hope to enhance what has become a 'must go' experience for music fans and industry alike'.

Running alongside the festival is The Great Escape convention which will once again host a variety of industry talks, panel debates, targeted networking sessions and keynote interviews for industry professionals and music business fans. So far, two targeted strands of the convention programme have been announced: Maximising Music Rights, supported by PPL and PRS for Music, and Global Digital Markets. The latter, as well as insight from a number of major industry players across the burgeoning streaming scene, will see artist/producer Dan Le Sac share the findings of an exclusive survey which aims to reveal what artists really think of the digital music market.