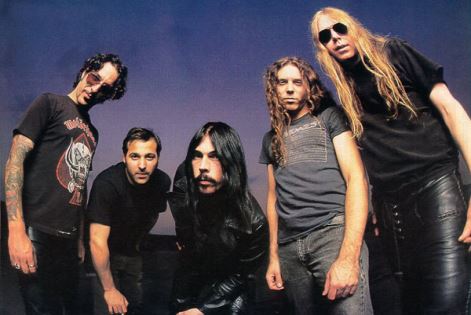 Legendary grime rockers Monster Magnet will make their first Download appearance in a decade, while atmospheric post-grunge pilgrims Chevelle, who were due to appear at the very first Download in 2003 but had to pull out at the last minute, finally r

That’s more like it, weather! A glimmer of sunshine, a patch of blue sky, a hint of summer in the air and festival season feels so close that you’ll find yourself airing out your mouldy tent in the garden, and attempting to cram yourself into that beloved Download T-shirt from 2008.
These heady daydreams take another step closer to reality today as the good people at Europe’s biggest rock and metal music festival, Download, are pleased to announce that DAY TICKETS for this year’s event will go on sale 9am Friday 28 March.
That means you, the rocker who can’t switch work shifts; you, the metalhead who used all your holidays in February; you, the hardcore punk expecting a massive, non-refundable furniture delivery: all of you can start to dream of an incredible day of live music and awesomeness at Download Festival 2014.
As if that wasn’t enough good news, 18 amazing new bands have joined the Download Festival 2014 bill.
Seminal punk act Against Me!, fronted by the phenomenal Laura Jane Grace, will make their debut at Download, bringing with them their signature crunching guitars and soaring choruses accompanied by thoughtful ruminations on the ideals of social justice.
Legendary grime rockers Monster Magnet will make their first Download appearance in a decade, while atmospheric post-grunge pilgrims Chevelle, who were due to appear at the very first Download in 2003 but had to pull out at the last minute, finally return in 2014 to claim their birthright.
For Monster Magnet this performance has been a long time coming: We're really happy to be performing at Download 2014. We've haven't played a festival in the UK for ages!
Another act which has a long association with Donington - hard-edged Geordie rock quartet The Wildhearts - return having made their debut at rock’s seat of power in 1994 and who last performed at Download in 2008.
Guitarist CJ reflected on the band’s relationship with the mythical stage: Well they just can't get rid of us. It's only 20 years since we first played Donington and in 2008 they turned the power off on us. Who knows what will happen this year...Bring it on!
These latest additions to the line-up also provide plenty of heavy riffage, in part through Italian power metal demons Arthemis. Lead guitarist, Andy Martongelli, shared his delight at returning to the festival:
Arthemis at Download Festival 2014! Hell yeah! Do we need to say more? There's nothing better than playing in front of the massive Download crowd. Last year we had a blast and it's such a true honour for us to be back! We'll deliver a very special, face-melting-show for this event so make sure you're there to share the awesome moment with us: Arthemis strikes back!
British juggernaut Orange Goblin also add to the heavy factor, while local Nottinghamshire boys Lawnmower Deth add a sharp dose of good old fashioned thrash metal to the party, with singer Pete Lee taking the opportunity to reflect on the band’s history with the festival:
Back again! Damn do we love Download. Damn do we love Copping. Our 4th time. You do realise them puppies Metallica have only officially managed 3! We’re in pole position baby. And to boot, Twisted Sister and the mighty, mighty Quo are playing on the same day. Is it only March? Come on already June.
On the other side of the rock spectrum, fellow Midlanders Page 44 will also return to add some passionate, stripped back post-punk to proceedings.
Making their first appearance by the racetrack is one of the most exciting young acts on the British music scene, Brighton blues rockers Royal Blood, who have recently been nominated for BBC Sound of 2014 award.
Other home grown talents taking to the Donington stage include symphonic punk rockers, The Dirty Youth, whose singer Danni Monroe is relishing another visit to Download, saying: We're over the moon to be invited back to Download festival for the third time. It has always been our favourite festival! Cannot wait to rock the second stage!
This sentiment was shared by melodic math-punk newcomers Marmozets, who said: We’re looking forward to playing at Download 2014. It was a blast last time and it opened a few doors up for us as a band.
Meanwhile, further Download debutants announced today are Japanese hard rock duo VAMPS (JPN) (not to be confused with The Vamps. Ever), Irish disco blues punks Kid Karate, ska merchants The Magnus Puto, Irish troopers No Hot Ashes, punk rockers Colt 45, hardcore punks Drones and Bristol rock’n’rollers Tax the Heat.
Drones looked ahead to following in: We are over the moon to be playing the hallowed ground of Donington and the legendary Download Festival, where so many of our heroes growing up have performed. We can't wait to tear it up and cause some chaos, see everyone in the pit!