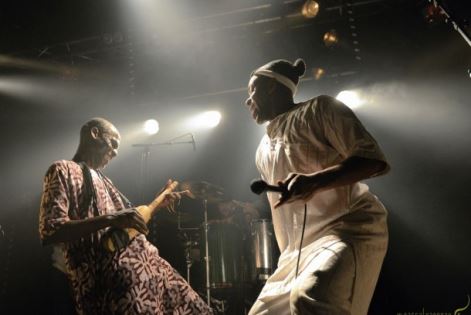 The UK’s largest, free African music festival Africa Oye will grace Sefton Park once again this summer and organisers have unveiled the first 3 acts of a globally acclaimed line up for the event, including UK soul legend Omar.

Now in its 23rd year, Africa Oye attracted record crowds of around 80,000 in 2014 to the two-day, family friendly city event, and the team are excited to reveal the first 3 acts for this year's event.

There are precious few, if any contemporary UK artists whose creative credentials and influence extend as far and so consistently wide as Omar. Since first breaking through to worldwide renown all the way back in 1991 with his first releases on Gilles Peterson's seminal Talkin' Loud label, Omar has gone on to work with all manner of musical legends including a certain Stevie Wonder. His original techniques have garnered him a strong legion of followers in the UK and a devoted fan base in diverse regions across the world.

In addition to Omar, the festival has announced two more acts that will grace the Sefton Park stage in June - Malian stars BKO Quintet and Reunion Island's Lindigo.

All the members of Mali’s BKO Quintet grew up with the music and culture of their ancestors, both the hunters and the griots. They bring together those separate traditions and the result is a unique sound that lives up to the album’s modern title, creating a new tradition of Malian music.

Lindigo is fronted by the charasmatic, Olivier Arasta, committed champion for continued development of 'maloya' - Reunion Island's vibrant symbol of creole culture whose strident vocal calls, chanted responses and complex percussion rhythms originated with the slaves brought to work on the sugar plantations and became a weapon of resistance, banned until the 1980s.

Artistic Director, Paul Duhaney is excited at the challenge of following 2014's record-breaking event. “Last year was a really special Oyé, there's no doubt about that. I'm really looking forward to revealing the rest of our line-up for 2015 and proving that we can follow it with another spectacular festival”

The main stage acts will be complemented by the usual eclectic 'Oyé Village' featuring an array of foods from across the globe, traders, DJs, dance classes and workshops in the Active Zone, as well as kids entertainment to keep Sefton Park buzzing throughout the festival weekend.

Published on 25 February 2015 by Ben Robinson