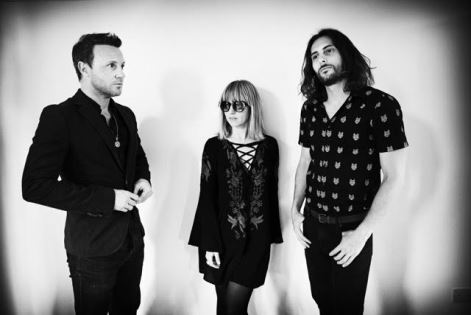 We are delighted to have THE JOY FORMIDABLE at FOCUS Wales 2016!

Drawing heavily on shoegaze and alt-rock, the Welsh trio have gone on to create more buzz than a swarm of bees with a megaphone on both sides of the Atlantic, touring with the likes of Editors and Passion Pit, releasing two revered studio albums, and infecting the nation with their darkly joyous soft-loud racket. They take the headline slot at FOCUS Wales on Thursday 12th May, at Central Station, Wrexham.

FOCUS Wales will once again take over the town centre of Wrexham for three days. Organisers expect an audience of 5000 people, to see showcases from over 200 bands from Wales and around the globe. A series of high profile and educational music industry seminars & events are also planned, plus stand-up comedy and arts events, adding to a host of activities taking place across the town.

Acts already announced for the 2016 festival include: Cardiff’s LOS CAMPESINOS! who play the festival on the Saturday night, Indie-electro crossover THE SUNSHINE UNDERGROUND, who will be one of the headliners on the Friday night, alongside an exclusive DJ set from PETER HOOK (ex JOY DIVISION & NEW ORDER), while fresh from supporting THE FOO FIGHTERS, rockers GOD DAMN join THE JOY FORMIDABLE as very special guests at the festival on Thursday night.

2016 also sees the return of stand-up comedy to the festival with JARRED CHRISTMAS, GARY DELANEY, SEAN HUGHES and PETE FIRMAN forming an all-star bill on the Friday night.

With more interactive sessions and industry speakers to be announced shortly, along with an expanded arts programme, more headline acts and another 100+ brilliant new music acts from the UK and around the globe, FOCUS Wales 2016 looks set to be the biggest yet. A limited amount of EarlyBird tickets, at just £30 each for the whole three day festival, are still available, but selling fast!

Published on 25 January 2016 by Ben Robinson