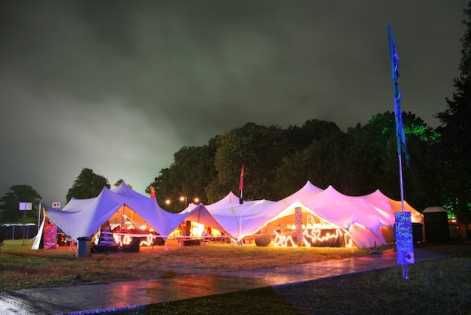 ‘Chai Wallahs’ is the largest independent music venue touring the UK festival circuit, consistently creating a spectacular and energising environment that provides the perfect back drop for programming and production partner ‘Diplomats of Sound’.

Continuing the run of weekly announcements, Kendal Calling presents a haven of eclectic and world music; The Kaylied area that returns this year in an exciting partnership with promoter legends Chai Wallahs and Global Local!
‘Chai Wallahs’ is the largest independent music venue touring the UK festival circuit, consistently creating a spectacular and energising environment that provides the perfect back drop for programming and production partner ‘Diplomats of Sound’. The Chai Wallahs stage in the Kaylied area will be a melting pot of genres purveying sounds from across the globe bringing extra layers to one of the North’s most diverse festival line-ups. Chai Wallahs in the Kaylied lays on the best in folk, balkan beats, hip hop, jazz, live dubstep, funk and ska!

Landing into the Kaylied area with their beautifully crafted marquee, shisha lounge and famed festival stage; Chai Wallahs and Arts Council funded project Global Local will revamp the Kaylied stage and serve up exotic flavours. Produced by Continental Drifts and its partners, Global Local is a ground breaking project that consistently brings some of the world’s best music to festival stages.

Dance outfit Dreadzone will be setting the night alight with their arresting sound and catalogue of hits. On the flip side are the calming sounds of Benjamin Francis Leftwich who has been making waves on the acoustic folk scene and will also take to the stage with his acclaimed sound.

6-piece Yes Sir Boss are an unstoppable force. Hailing from Bristol the outfit are original and distinctive with off beat rhythms, singalong choruses and epic riff and horn sections!

Edinburgh based band, Hidden Orchestra combine drummers, samples and dub basslines to create cinematic soundscapes, which is truly music to be experienced.

Festival favourites King Porter Stomp are also joining the bill along with folk extraordinaire Lucy Rose who has been receiving lots of national attention of late, and Jesca Hoop who returns to Kendal following the release of her third album “The House That Jack Built” this Summer.

One act not to be missed are 10-piece live band Slamboree, who waltz aboard complete with circus performers, brass sections, carnivalesque guitars and more to create an immersive audio-visual experience, incorporating electronic music with live instruments, acrobatics, pyrotechnics and fire!

Other artist highlights include Kendal Calling favourite and much-loved BBC Radio DJ Craig Charles who returns to close the festival with his acclaimed Funk and Soul Show which is sure to get those wellies deep down on the dancefloor for his extra special extended set at this year’s festival.

The music and activities in the Kendal Calling meadow span 14 diverse stages and areas, situated in a close-knit site that means you’re never far from your friends; areas include Mainstage, GLoW dance tent,