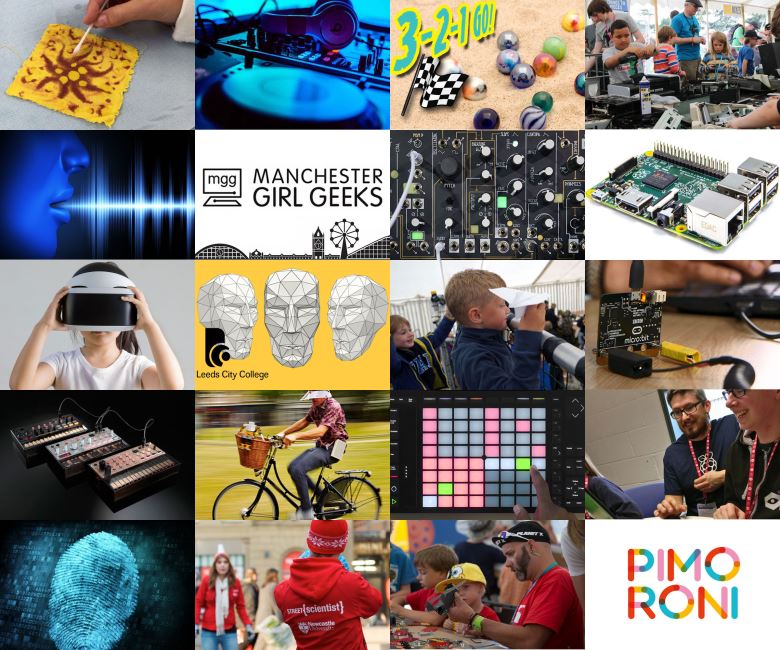 Deer Shed Festival is widely regarded as the best family friendly – or more accurately, family-centric – festival in the UK due to the team’s determination that every Deer Shedder, young and old alike, should leave Baldersby Park feeling enriched

A host of the workshops and activities on offer at #DeerShed8 have been designed specifically to suit the national curriculum’s Key Stage 2 objectives (and beyond), whilst providing entertainment for all ages. This year’s science workshop tent promises to be the most exciting and rewarding for the whole family in Deer Shed’s eight year history.

MANCHESTER GIRL GEEKS is a not-for-profit group which organises networking events, talks and hands-on workshops for women and girls with an interest in Science, Technology, Engineering and Mathematics (STEM). The Girl Geeks team will be up to all sorts in the science tent this year with a view to inspiring young Deer Shedders regardless of their gender.

Deer Shed favourites LEEDS CITY COLLEGE will bring their game design wizards to the festival this year. Armed with high-spec computers and technical magic, they will help you create your own AVATAR MASK. Have your photograph taken, play around with some digital wizardry, and before you know it, Bob's your uncle, you've turned your face into a digital clone of yourself that you can wear whilst you stroll disguised around the festival.

The Science Tent would not be the same without PAUL GRANJON on his mission to explore the co-evolution of humans and machines. Indeed, in 2016 he had a year off and it wasn't the same! #DeerShed8 welcomes back a rock star-maker and the man that bought you the cybernetic parrot sausage. What will he get up to this time?

Almost twenty years ago, Deer Shed organisers were making terrible music in a room full of gear. Things they bought for £2000 are now worth so little that kids took them to bits in last year's Wrekshop. Sulk. Times have changed drastically, so, with the help of ABLETON LIVE + PUSH, you can explore the current state of digital music making.

#DeerShed8 will also present an addictive journey into the world of MODULAR SYNTHESIS. This is an opportunity to learn a little about how different sorts of waveforms sound and how they can be manipulated in all sorts of different ways. And if you want to sound like Tangerine Dream, you can!

The festival will present more items of very reasonably priced musical deliciousness to start collecting: KORG VOLCAS. Tiny bundles of tweakable sound that all do different things but can all be easily synced together. Electronic music making is enjoying something of a golden age at the moment with a new generation of very hands on and cheap toys to play with – ideal for summer fun!

2017 will mark the fourth year Deer Shed will offer a FORENSICS workshop. The crime this year, with a nod to the festival’s theme, is an elaborate robbery involving the Wilderwild gang. No murder this year as far as is known… phew! It's up to Deer Shedders to investigate, document and ultimately solve the crime.

VR: that's VIRTUAL REALITY to you and me. After twenty years of being a thing, VR is now a thing that you can have a go on and that works incredibly well. Look like whatshisname out of Daft Punk whilst experiencing the terror of walking the plank 1000ft up in the air and other less brain mangling simulations.

Experience Isaac Newton's Laws of Motion (v = u + at and all that) on the festival’s MARBLE RACING course. Choose your marble colour, have a quick wager on the side with your Dad, release the colourful critters and watch them jostle for pole position on the course made from sand, old plumbing bits, loo rolls and any other bits of stuff they've got laying around the shed.

Deer Shed will also welcome the NEWCASTLE UNIVERSITY STREET SCIENTISTS, a team of enthusiastic students who are specialists in SCIENCE BUSKING, bringing science to life through short, interactive demonstrations. Prepare to be amazed, baffled, inspired and entertained!

Despite its family friendly ethos, Deer Shed is a little famous for showcasing late night DJ sets, this year from the likes of Marc Riley and Andy Kershaw. Now, you can learn how to mix like them at the DJ-ING WORKSHOPS. Of course, there’s more to being a good DJ than working all the gadgets, which they will teach you. But how do you get a room full of baby-boomers up on their feet? Can you follow Dancing Queen with Shake Your Tail Feather? Those and many more questions answered.

Slime is no longer just something that you find at the bottom of your kitchen swing-bin or in the U-bend. There are various types of slime: some are quite disgusting and contain bits of old tea bags and others are not so bad. Deer Shed will be creating a less gross type of slime from their special slime recipe book in this year’s SLIME MAKING workshop.

New Deer Shedder Amelia and her team from YORK UNIVERSITY will be providing enlightenment as to how we chat, shout, whisper and sing. Amongst other things they will be running live spectrograms so you can "see" the sounds of your own voice and even calculate the length of your vocal tract. You can even try out their build-your-own-larynx activity using paper models. The SCIENCE OF THE HUMAN VOICE is nothing short of astonishing.

Back by popular demand after the success of last year, #DeerShed8 will offer a workshop making WATER ROCKETS. Take a water bottle, decorate and add fins and various bits to aid stability… or not. Then take your interstellar creation to the festival launch area where, with assistance from mission control, they will launch your rocket skyward.

Over the years Deer Shedders have taken apart quite a lot of electrical bits and bobs to see how they work - just for the sheer joy of trashing stuff. It's not something kids are usually allowed to do and consequently the WREKSHOP is a very popular activity! Just keep an eye on your electrics once you return home.

DAN ALDRED is a champion of all things silicon, but mostly he is an educator on a mission to convey the power of coding. Not just noodling about in M$ Excel, but actually bending machines to do your bidding. If you can code – properly – the digital world will fall at your feet. Dramatic but so, so true. Where better to start than at #DeerShed8?

Four years ago Deer Shedders built their PiCube out of the first generation RASPBERRY PI: 4 Pis, 4 monitors, 4 keyboards, 4 mice all housed in a 4 sided steel frame and great for playing the Linux port of Quake in multiplayer. Since then they’ve have been through loads of versions of the Pi, all more powerful or more convenient than the last one. Find out the current state of all things Pi in the science tent this year.

The BBC MICROBIT is seen as the successor to the famous BBC Micro from the 1980s. We've all been waiting a while for it - 34 years in fact. Every Year 7 child across the UK will be given a Microbit eventually except they are not ready yet. But they will have some at #DeerShed8 so that you can start writing code ASAP. It's the same ethos as a Raspberry Pi but a simpler beast with more flashing lights.

Did you know that turmeric is magic? As well as tasting great, you can make art and magical potions with it! THE COLOUR EXPERIENCE invite you along to #DeerShed8 to investigate this fantastic stuff by creating chemistry and art that will amaze you! SHENANIGANS is a hands on activity brought to you using ingredients you can find in your own kitchen, so do try this at home.

MADLAB is an innovative electronics company that manufactures electronic kits that you can put together to make your own useful gadgets. From lie detectors to electronic bagpipes, at Deer Shed they have something for all budgets and all abilities, from beginners to master solderers .

When we talk about “people power”, it’s rarely intended to mean people literally generating electricity. Well, it certainly does at Deer Shed! The basic idea behind CYCLOPS PEDAL POWER is that wheel of a bike is connected to a motor. When someone pedals, the back wheel turns, and subsequently turns the motor, generating electricity. The more bikes you have, the more power you can get at once. Will you become a cog in the #DeerShed8 People-Pedal Power Generator?

Deer Shedders had so much fun the year before last with the Up in the Air theme that they had to bring back their PAPER AIRPLANES. Of course H&S considerations exclude the making of 'darts' with their poke your eye out noses but 'darts' are only for sad Dads anyway. Their designs, which they will teach you, are far, far more sophisticated. The festival has loads of indoor flying space and will bring back their launch platform to get you a bit more height.

Paul from PIMORONI was the fella who designed the Raspberry Pi logo. A good claim to fame. He has been going to Deer Shed on the bus since the science tent came into existence in 2013.  They’ve watched the Sheffield based company grow quickly over the last few years and are very excited to see what Paul will bring along for you to play with this year.

Ah, how all the old fellas in the Deer Shed audience appreciate the youngsters getting into MECCANO. Quite right - put your phones down! Build something really great and you can even probably nick it when no-ones looking. The festival team are certainly used to replenishing their Meccano stock!