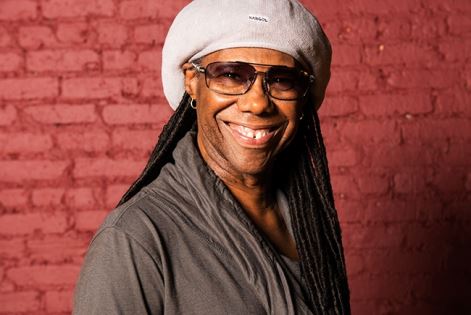 The producers of Freeze Big Air 2015 are excited to announce that iconic R&B/dance band CHIC featuring Nile Rodgers are inviting London to ‘Freak Out’ and ‘Get Lucky’ at the capital’s biggest après-ski party this November at the Queen Elizabeth Olympic Park. Freeze Big Air will be Britain’s biggest-ever snow sports and music event, an unmissable celebration of music and winter sports culture taking place to the soundtrack of the greatest dance band of all time: CHIC feat. Nile Rodgers – totally LIVE, playing their smash single I’ll Be There.

As well as watching the world’s best après party band in front of one of the capital’s truly iconic backdrops, snow-loving visitors to Freeze Big Air will be able to sample all the alpine food and atmosphere of the mountains in one amazing day – mulled wine, spiced cider, raclettes, fondue and the world’s best snowboarders and skiers battling it out on the biggest real snow jump ever built in the UK. And, with this being CHIC ft. Nile Rodgers ONLY London date for winter 2015, tickets are expected to go quickly. With loads more supporting acts and DJs to be announced, Freeze Big Air looks set to be the capital’s official winter season curtain-raiser.

Festival Director Andrew Topham said: 'We are thrilled to confirm ultimate party headliners Chic featuring Nile Rodgers, who will undoubtedly bring the ‘Good Times’ to the Queen Elizabeth Olympic Park in their last London date of 2015! We are counting down the days for what's set to be a truly incredible night of good time disco.’ Known for being involved in almost every significant popular music moment of the last forty years, Rodgers has sold over 200 million albums and 50 million singles world-wide.

As the co-founder of CHIC, Rodgers has nine Rock and Roll Hall of Fame nominations, helped invent hip-hop with the track Good Times, and was inducted into the Grammy Hall of Fame this year for the global smash Le Freak.

As a solo musician and producer, the Grammy-winning composer, cultural icon and music innovator has more than 200 production credits to his name, including David Bowie’s Let's Dance, Madonna’s Like a Virgin, and We Are Family by Sister Sledge. He’s also worked with Duran Duran, Mick Jagger, Grace Jones and Michael Jackson. Even today, Rodgers has managed to stay ahead of the curve thanks to his recent innovative collaborations with Daft Punk, Avicii, Disclosure and Sam Smith.

This untouchable pedigree means that CHIC featuring Nile Rodgers are the perfect headline act to close out this year’s Freeze Big Air. As well as legendary hits such as Good Times, the Freeze audience will hear tracks from CHIC’s first album in over 25 years including new single I'll Be There.

Published on 23 September 2015 by Ben Robinson