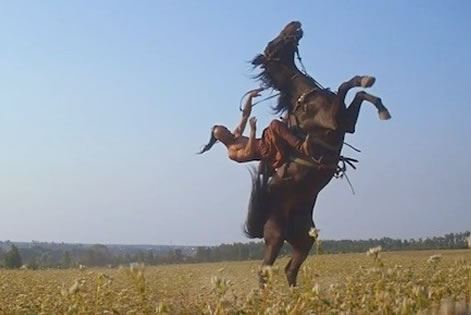 Mumford & Sons are pleased to unveil the video to their new single ‘Ditmas', released through Gentlemen of the Road/Island Records on 11th September 2015.

‘Ditmas' is lifted from the band's critically acclaimed third album, 'Wilder Mind', which debuted at number one in six countries, including the UK and US.

The video was shot on location in Kiev by director Alex Southam (Alt-J/John Grant/First Aid Kit).

Speaking of the experience, Southam explains: “Whilst recently filming in Ukraine, I started doing some research and learning about Ukrainian Cossacks – their heritage, history, and associated spiritualism. I was surprised to learn that there is a small but ardent population who keep the traditions going.

“The narrative for Ditmas came about whilst discussing another idea for the band, when the suggestion of a cossacks were mooted. Cossacks are synonymous with incredible horesemanship, so it felt like a natural fit. Our character (Evgeniy) in the video has grown up within a cossack community.

"The video was shot in the stunning countryside surrounding Kiev which was something to behold. I spent a long time discussing our narrative and approach with Evgeniy, breaking down our narrative beat, as well as I could given the language barrier. Whilst the shoot was pretty brutal and unforgiving - particularly for our hero - we captured something really special.”

Ditmas (or Ditmas Park) is an artist-friendly neighbourhood in Brooklyn, and the location of Aaron Dressner’s studio where Mumford & Sons wrote and demo'd much of Wilder Mind. It’s a song that emphatically showcases the band’s electric new sound, yet loses none of the intimacy or melody-rich appeal of the songs from their hugely successful albums, 'Sigh No More' and ‘Babel'.

Since the album’s release, Mumford & Sons have hit the road on a sold-out headline tour of the US, whilst bringing the first of their 2015 Gentlemen of the Road Stopovers to Seaside Heights (New Jersey) and Waverly (Iowa). Despite having only introduced these new songs into the live sets this year, Ditmas has quickly become a firm favourite.

Ditmas follows the release of the record’s introductory singles, ‘Believe' and 'The Wolf'.

Joining the band over the course of this Summer’s GOTR Stopover Festivals will be the likes of The Foo Fighters, The Flaming Lips, Ben Howard, Primal Scream, The Vaccines, The Maccabees, My Morning Jacket, Alabama Shakes, Jack Garratt, Simian Mobile Disco, and Jenny Lewis. The UK will enjoy its first Stopover weekend of 2015 in Aviemore, Scotland on the 31st July/1st August.

The Aviemore Stopover will be swiftly followed by Mumford & Sons’ first headline performance at the Reading and Leeds Festivals in late August.