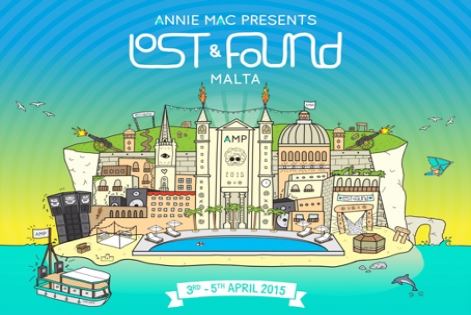 Lost & Found is a brand new festival located on the beautiful Mediterranean island of Malta and set to showcase a selection of the world’s best DJs across a three-day exploration of electronic music. Armed with a mixture of both established and up-and-coming acts, Lost & Found will deliver a credible and carefully crafted line-up against the dynamic and beautiful Maltese backdrop.
Amongst the first names confirmed for 2015 are ‘Hot Creations’ head Jamie Jones, legendary reggae selector David Rodigan MBE, chart-topping dance sensation Duke Dumont, and Canadian alt hip hop don Kaytranada. There will also be sets from garage icon DJ EZ, house veteran MK, NYC house boys The Martinez Brothers, and irrepressible selector Jackmaster; and of course a headline set from Annie herself.
Coveted new talents Hannah Wants, My Nu Leng, Paleman and Patrick Topping will be joining the ranks too, as well as fellow BBC Radio 1 stalwarts Toddla T, Benji B and B.Traits. Legendary DJs Cajmere and Kerri Chandler are also set to appear.
Lost & Found will offer a high-end experience throughout with festival-goers able to stay in a selection of reasonably priced hotels with a price tag of just £14.99 per person, per night. Additionally, low-cost flights regularly travel to and from Malta with taxis and buses providing easy travel to and from the festival location. Set across 8 core venues, with beach parties and boat parties conveniently located a stone’s throw from one another, revellers can party from dusk till dawn, on land or at sea, without having to negotiate long distances back to their accommodation. A festival transport service will also be operating around the island, further enabling attendees to easily travel between all venues.
Annie Mac Presents Lost & Found Festival has been created by a set of established promoters based in the UK and Malta - The Warehouse Project, Sound Channel, Drop the Mustard, Metropolis, Fresh Events, Lights Out and Annie Mac herself - who have all come together to create a fresh and exciting new festival concept. Fresh off the back of her number one dance album ‘Annie Mac presents 2014’, Annie remains the UK’s number one electronic music tastemaker with a global event series selling out worldwide.
Speaking on the project, Annie said:

“Having attended festivals all my life, I did not enter into this project lightly. I've worked with the team involved for 10 years now, we've visited Malta, toured the event spaces and hotels, and all worked together to curate what i think is an incredible line-up. Expect boat parties, beach parties, night time open air raves and plenty of AMP surprises!
After visiting the island it was unequivocal it should be the home of our AMP festival; it’s extremely beautiful and the people there are so warm and welcoming. It’s going to be a very special weekend.”
Annie Mac's AMP live events series have grown from humble beginnings at the small third room in London’s Fabric nightclub, to curating stages at Miami’s Ultra music festival, SXSW in Austin and Creamfields, Lovebox and Bestival in the UK.  A natural progression for Annie, Lost & Found looks set to be a game-changing date on the festival calendar.
Look out for further announcements to be made in the coming weeks.
Tickets
General admission tickets available from 9am on Friday 20th November here:
www.lostandfoundfestival.co.uk
Price: Earlybird tickets from £69 // £89 second release
Website: lostandfoundfestival.co.uk
Facebook: facebook.com/lostandfoundfestival
Twitter: twitter.com/AMPlostandfound

Published on 22 November 2014 by Wayne Feltham