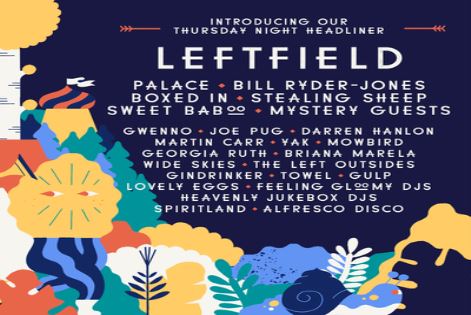 Synonymous with the rise of UK Dance music throughout the nineties (and well beyond), we are ecstatic to welcome the legendary Leftfield as our Thursday night headliner!

2015 see’s Leftfield celebrate 20 years since the release of seminal album ‘Leftism’ and their latest record ‘Alternative Light Source’ proves they still produce some of the most vibrant electronic music around. Leftfield will kick off the festival in style and are not to be missed.
Also joining us are London four­ piece Palace, ex-Coral production genius Bill Ryder Jones, the Krautpop inspired Boxed In, psych-folk three piece Stealing Sheep, Green Man favourite Sweet Baboo performing an additional slot on the Mountain Stage and Green Man Rising winners Hunck. We also have a special mystery guest but you’ll have to watch out for more clues on that.
Completing the already jam packed weekend, we also welcome Gwenno, Joe Pug, Darren Hanlon, Georgia Ruth, Martin Carr, YAK, Mowbird, Briana Marela, Wide Skies, The Left Outsides, Gindrinker, Towel, Gulp, Lovely Eggs, and some of our favourite DJs Feeling Gloomy, and Heavenly Jukebox.
A first look at the Rising Stage, which includes the five finalists from Green Man Rising -