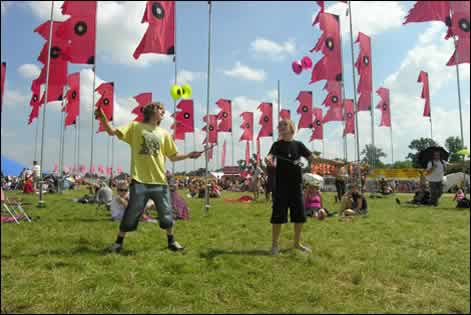 Seven giant sea containers lie marooned in the Wiltshire landscape. The mysterious remains of an ancient civilisation or the shape of things to come?

Since 1982 WOMAD has presented successful festivals in the UK and in 26 countries around the world.  With a magnificent disregard for creative and national boundaries, for pigeonholing or for playing-it-safe, the festival again welcomes artists from all over the world next month, to the rolling hills and rural beauty of its idyllic location in Wiltshire.

As its name suggests, WOMAD brings to worldwide audiences the best of music, dance and art from many culturally diverse traditions.  While music forms the core of each festival programme, the visual arts have always played a key role.

Following the success of last year’s installation Moving Portraits, WOMAD has once again invited Jeni Walwin and Tammy Bedford to curate a programme for the 2011 festival.

This year no fewer than six leading artists will be showing their films inside their own sea containers in an exhibition named GIVING SOUL.

Each container will be fitted with the technology to display a series of short animated films at cinema-quality, free, to all-comers throughout the festival.  Each full cycle will last approx 8 minutes, focusing on the work of six artists considered to be leaders in the field in this medium. The selection will take in a wide definition of animation, involving a range of techniques – the drawn, the painterly, the sculptural, and the digitally adventurous – and will represent a variety of themes which include humour, global politics, the environment, ecology and club culture.

WOMAD Charlton Park 2011 takes place at Charlton Park, near Malmesbury in Wiltshire on the weekend of 29-31 July. This is the fifth year that WOMAD has held its principal festival. The organisation now has 29 years’ experience of hosting festivals worldwide.