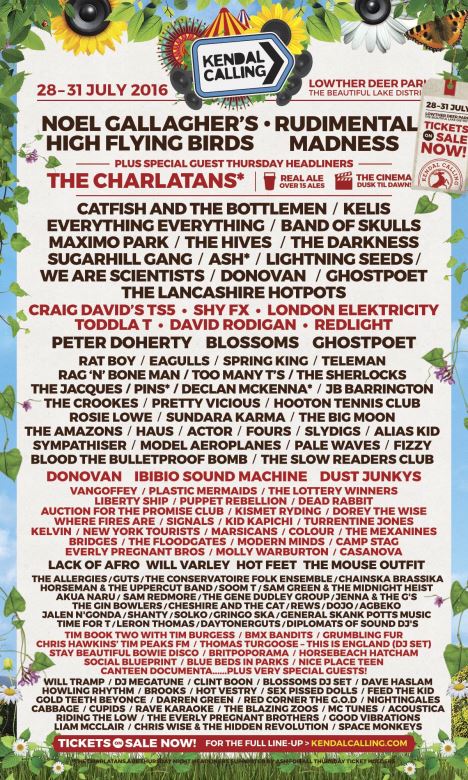 Kendal Calling announces the selection for this year’s Real Ale Festival, complete with signature festival beers ‘Kend’ale’ and ‘Oh Deer!’ as well as the lineup for the Chai Wallah Stage.

Set in the picturesque Lowther Deer Park, Kendal Calling is renowned for making the most of the Lake District’s famed pubs and local breweries. In keeping with the summer festival theme, the Real Ale Festival comes complete with its own line up, curated by ale connoisseurs and featuring the best from local breweries including Tirril Brewery, Lancaster Brewery, Ennerdale Brewery, The Borough, Stringers Beer, The Ulverston Brewing Co, Old School Brewery, Kirkby Lonsdale Brewery, Cumbrian Legendary & Cumberland Brewery, Hardknott Brewery and Caledonian Brewery. Ready to welcome all Kendal Calling festivalgoers, gluten-free ale options will be provided by the forward-thinking Stringers Brewery.

Renowned for impromptu sets from the likes of Mumford & Sons, Frank Turner and Michael Kiwanuka, the Chai Wallah Stage has announced the line-up for their famed alt-folk soirée. Making the festival hall of fame are Lack Of Afro, DJ Sam Redmoore, The Conservatoire Folk Ensemble, Chainsaka Brassika, Will Varley, Horsemen & The Uppercuts, Aka Naru, GUTS, The Mouse Outfit and The Allergies plus many more acts.

Returning to its home at the Lake District’s Lowther Deer Park, this innovative, independent festival prides itself on providing festivalgoers with 4 days of arts installations, comedy, gourmet food, kid’s entertainment and a real ale festival alongside their amazing musical programme all within the confines of what is widely regarded to be the most beautiful festival site in the UK.