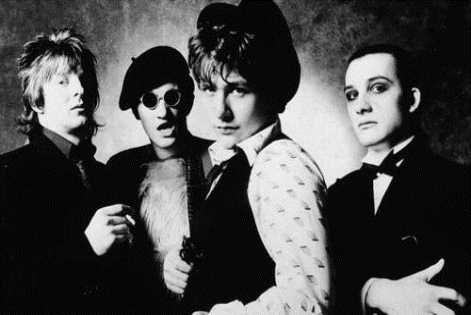 Wychwood Festival, the UK's leading family festival, is thrilled to announce another dazzlingly diverse batch of artists confirmed to appear across the festival weekend in 2012.  UK punk legends The Damned, Duke Special, the supremely intelligent Fay Hield and her Hurricane Party, Romanian gypsy band Mahala Rai Banda, ex-Beetroot Kings frontman Gary Armstrong and London-based alt. folkers Urusen have all been added to the line-up, proving Wychwood Festival to once again be a treasure trove of the ecclectic, diverse and sonically engaging. Now in its eighth year, Wychwood Festival takes place at Cheltenham Racecourse and is set against the picturesque backdrop of the Prestbury Hillsn Gliucestershire. Tickets are on sale now and available from the official festival website.
With economic and social upheaval in England during the 70s, disenfranchised youngsters stepped up to the stage and began initiating chaos. This was the birth of the infamous British punk movement. The Damned were at the forefront of this movement as one of the earliest punk bands to form. They were the first British punk band to release a single, an album, and tour America. Having formed in 1976, the band now have over 35 years of punk rock history under their belts. The Damned are incredibly ambitious and have constantly evolved, with their later albums taking influences from psychedelia, prog rock and metal genres. The Damned are generally recognised as one of the founders of goth music and have been a constant source of inspiration for many emerging hardcore bands.
Fay Hield’s earthy approach to singing and her haunting and powerful delivery uniquely appeal to both older and younger audiences and it wasn’t long before Topic Records, Europe’s oldest and most respected Independent Record Label, approached her with a view to signing her as their first new artist in 20 years. Raised in the singing community of the West Yorkshire Pennines, Fay’s childhood was as much influenced by the bare essentials of the West Yorkshire landscape as the lively, warm music scene surrounding the Famous Bacca Pipes Folk Club in Keighley. Her debut solo CD, ‘Looking Glass’ was released to a fanfare of music media praise and brought her a nomination for the Horizon Award at the BBC Radio 2 Folk Awards in 2011. She has guested on the latest CDs by Martin Simpson and Spiers & Boden and has been described as “a real singer… in an age of honey throated whimpering" by fRoots and “Unadorned – and quite exquisite…Hield is a rare talent" by Uncut.
Duke Special is an artist aptly named. Dynamic, musically ambitious & bracingly eccentric, with his inimitable style and lush musicality. Hailing from Belfast with a sound that is self-confessed “hobo-chic”, Duke Special - AKA the endlessly inventive Peter Wilson - is once heard, never forgotten. Blissfully at home in his own alluring genre of beautifully bruised romanticism, Duke Special inhabits a world unlike any other - a world filled with vaudevilleesque sensibility, sing-a-longs and addictive melodies. “My sound is a bit vagabondy, but pure and soulful too,” he explains.
Mahala Rai Banda is a gypsie band with members originating from small Romanian villages and retired soldiers from Moldavia. Shaped in the Gypsy ghettos around Bucharest, Mahala Rai Banda (translated as Noble Band from the Ghetto), combine a dazzling array of styles. The band play Romanian violins & accordions with a brass section and a riotous rhythm section. They group form inventive arrangements and perform them in style to create an energetic party atmosphere at every show. Tracks by Mahala Rai Banda have been covered and sampled by Nouvelle Vague, Balkan Beat Box, Dj ClicK, Forty Thieves Orkestar and Russ Jones. Their song “Mahalageasca” makes an appearance in the Borat film and also features on the Buddha Bar Ten Years compilation.
The former front man with Mansfield-based indie rock band The Beetroot Kings Gary Armstrong backs up his huge local following and obvious talent with some impressive guitar-driven material. Gary is no stranger to the underground or the festival circuit, with countless shows behind him. From pop tonal summer days screaming at pre-teens, to rock and blues bike fests under a rain of real ale to underground unlicensed folk punk fests, Gary has achieved something so many artists have tried to do before him and bridged the void of all the genres.
Urusen are one of the most exciting bands to emerge out of the UK alt-folk scene. The London based band have performed at festivals across the UK including Glastonbury, Secret Garden Party, Larmer Tree and 2000 Trees, cementing themselves as a festival favourite with their musicianship, heartfelt narratives, and exhilarating dedication to performance. They recently recorded a new album at Realworld Studios with producer Steve Osborne (Elbow, Doves, KT Tunstall, PJ Harvey) which is due for release in early 2012.

Published on 22 February 2012 by Ben Robinson