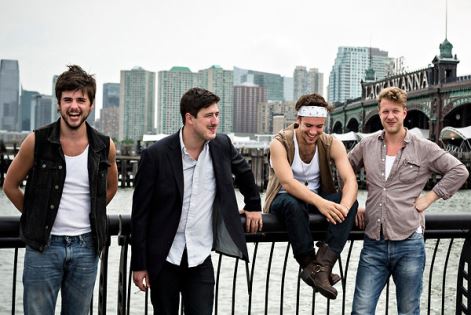 Mumford & Sons are one of the world’s most popular bands and will follow their debut visits to South Africa and South America in early 2016 with a return to London at the iconic Hyde Park.
In May 2015, the British rock band released their third album, Wilder Mind, a gloriously electric return that harnessed Mumford & Sons’ seemingly natural ability to write songs that appeal across the spectrum, with a grittier, hard-hitting dynamic. The album debuted at number 1 in six different countries including the UK and America.
Mumford & Sons:
“Hyde Park for us: sacrificing hopes and dreams at the altar of Neil Young; being transported to another dimension by The National; supporting Arcade Fire (the best band in the world); playing alongside our mates The Vaccines; accidentally seeing Black Eyed Peas; wishing we were at Kylie.  What a place.  And this time we get to headline and pick a bill of sick artists to play with us.  Alabama Shakes!  Wolf Alice! Gentlewomen of the Road!  We’re travelling all over at the moment, so having this massive gig to look forward to next Summer, right in the heart of our home city, is just awesome.”
After releasing their debut Sigh No More in 2009, Mumford & Sons quickly became one of the world’s most successful and celebrated young bands. Their second record, 2012’s Babel was one of the biggest selling records of the year, and they debuted their hugely successful Gentlemen of the Road Stopover festivals which have since entertained hundreds of thousands of fans across the UK, America, and Australia with stellar, hand-picked line-ups featuring the likes of The Maccabees, Jack Garratt, Vampire Weekend, and Foo Fighters. Over recent years, Mumford & Sons have also backed the likes of Bob Dylan, Bruce Springsteen, and Creedence Clearwater Revival’s John Fogerty.
In 2015, following a successful series of Gentlemen of the Road Stopovers (including Aviemore in the Scottish Highlands), Mumford & Sons headlined two spectacular shows at the Reading & Leeds Festivals, and an intimate performance at London’s Roundhouse for the Apple Music Festival. They conclude the year on a sold-out arena tour of the UK, their first on home turf since 2012.
Alabama Shakes hail from Athens, Alabama, USA and have risen from playing covers in local old people’s homes to being recognised as one of the most exciting rock bands to come out of America in recent times (and played their own White House gig).  Vocalist, guitarist and lyricist Brittany Howard has been compared to both Janis Joplin and Aretha Franklin and debut album Boys & Girls set the template in 2012, catapulting them to slots on Saturday Night Live and a world tour for their super charged southern blues rock and soul, with many hearing echoes of Alabama’s own classic Muscle Shoals studio.  Rolling Stone magazine named their song ‘Hold On’ as the song of the year.
This year, second album Sound & Color became a US Number 1 and the band’s reputation for incendiary live shows means that their appearance at Barclaycard presents British Summer Time Hyde Park gives them a platform to blow even more music fans away.
Closer to home, North London’s Wolf Alice will play their biggest ever show in their home town.  Only releasing their debut single in February 2013, they have become the most exciting young rock band in the UK and are now Mercury Prize nominated for their debut album My Love Is Cool, which is decided tonight.  With a fanatical live following gathered from relentless touring, they are THE band to catch before they go supernova.
Barclaycard presents British Summer Time Hyde Park hits its fourth year in 2016, firmly established as the essential London summer event.  Already announced for July 9th as headliners are Take That, bringing their full live experience to Hyde Park for the very first time.
Barclaycard presents British Summer Time Hyde Park is nominated in the UK Festival Awards 2015:
Best Major Festival, Best Family Festival, Best Headline Performance (Taylor Swift), Best Hospitality, Line-Up Of The Year
Previous awards wins include:
Headline Performance of the Year (The Libertines) at the UK Festival Awards 2014
‘Festival of the Year’ at the UK Event Awards 2013
‘Best Use of New Technology’ at the Festival Awards 2013
James King, Senior Vice President, AEG Live comments: “Mumford & Sons always deliver amazing shows for their fans. We’ve tried for many years to get them to come to and headline Hyde Park and so this feels very special for us to have them in 2016. The event will feature incredible Artists across all 5 stages and the guys are bringing their full site wide production to deliver what will be a one off summer spectacular. The band have helped deliver an unbelievable support bill featuring some of the very best artists including Alabama Shakes and Wolf Alice, who will all make this an unforgettable day out for their fans.”
Daniel Mathieson, Head of Experiential Marketing and Partnerships for Barclaycard, said: “Barclaycard presents British Summer Time Hyde Park is once again shaping up to be a fantastic event with iconic British pop band Take That already confirmed for 2016.  We’re now delighted to announce that legendary rock band Mumford & Sons, celebrated for their superb live performances, will be headlining on the famous stage on the 8th of July.  Tickets will be in huge demand I’m sure - Barclaycard customers have exclusive pre-sale access from the 23rd of November so should get ready to book their place at one of the musical events of the summer.”
Alun Mainwaring, Head of Events at The Royal Parks, said: “We are very proud of what has been achieved so far with Barclaycard presents British Summer Time Hyde Park. Since 2013, this world class event has attracted over a million people to the park. By attending BST, fans not only get to see the best artists from around the globe but by enjoying themselves are providing vital funds which go back into maintaining this amazing park.”
@BSTHydePark
GENERAL ON-SALE: 9AM FRIDAY 27TH NOVEMBER
Barclaycard presale tickets: 9am Monday 23rd November
AEG presale: 9am Wednesday 25th November

Published on 21 November 2015 by Wayne Feltham